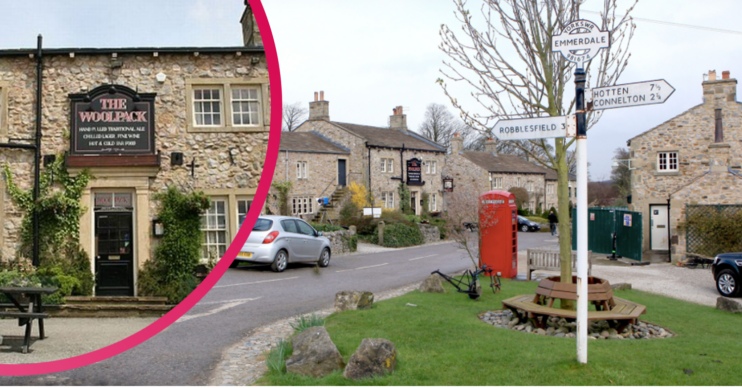 Would you fancy having a drink in the real-life Woolpack?

The Emmerdale village is set in a fictional location in the Yorkshire Dales, in between Leeds and Bradford.

It’s close to the made-up town of Hotten, where the Emmerdale kids go to school and villagers often go for a night out. Hotten is loosely based on a town called Otley, which is where most of the Hotten-based scenes are filmed.

But unlike lots of television locations, Emmerdale itself isn’t just a set – it’s a real-life village in the heart of Yorkshire.

Where is the Emmerdale village?

When Emmerdale first began in the early 1970s it was filmed in a village called Arncliffe in North Yorkshire.

Arncliffe, though, is a long way from the television studios in Leeds, so the show bosses decided it was better to move to a new location.

They chose the village of Esholt, just north of Bradford. Strictly speaking, Esholt isn’t in the Yorkshire Dales but it looks enough like a Dales village to be the perfect location.

For quite a long time no one knew that Esholt was the real-life Emmerdale, except for the residents of the village and the people involved in the soap.

But when the news got out, the fans descended! The village even had to build a new car park for all the coaches that arrived carrying soap viewers.

The pub in the village, which had been known as the Commercial Hotel, was renamed The Woolpack to please fans.

But with Emmerdale increasingly popular, the locals eventually got fed up with all the tourists so in the 1990s, the show’s bigwigs came up with the idea of having a purpose-built village created.

Though Emmerdale isn’t filmed in Esholt any more, it was used when Ashley Thomas was suffering dementia.

Ashley thought his home looked different, because of his illness, so those scenes were filmed in Esholt which obviously was slightly familiar, and yet not. Clever stuff!

In 1997, the current Emmerdale village was created. It’s on the Harewood House estate near the ITV studios in Leeds – where the interior shots are filmed.

The clever design team lovingly recreated Esholt, with a few nods to the original filming location of Arncliffe.

The switch from filming in Esholt to filming on the purpose-built village in 1998 was seamless. The first scenes in the new location were of Kim Tate stealing some milk from the milk-float parked outside the pub!

Now all the exterior scenes are shot in Harewood, and the interiors are mostly at the ITV Studios, which might give the producers some scheduling headaches but gives Emmerdale an authentic feel.

Can you visit the Emmerdale village?

Sadly, you can’t visit the village on the Harewood estate. You can however, take a tour of the studio sets in Leeds.

And several tour companies organise tours to Esholt – where you can have a drink in the original Woolpack – and Otley, aka Hotten.

Would you like to visit the locations of your favourite soaps?