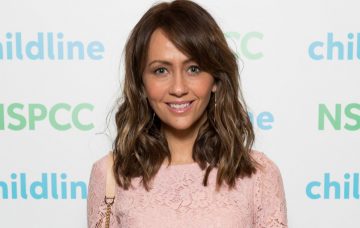 Cobbles stunner Samia Longchambon first entered Coronation Street back in 2000, and she’s quickly become one of the soap’s most memorable characters.

And she’s just revealed that she has no intention of quitting the popular ITV soap any time soon, and for an important reason.

She told The Mirror that starring in Corrie not only ensures work all year – a rarity for most actors – but she also gets to go home to her family each night.

Read more: Samia Longchambon sets up a spa in her dressing room

“I feel funny when people ask me about leaving,” she admitted.

“I’m an actress and I’m in a job where I get to act all year round, so it’s perfect.

“I get to go home and see my family at night – if I left, I wouldn’t be guaranteed to work in Manchester and that’s my priority,” Samia told the paper.

She is a mother of two, and married to her second husband Sylvain Longchambon.

Samia met Sylvain, a professional ice skater, when the pair were coupled up as partners on 2013’s Dancing on Ice.

She added that she can’t even imagine not working on Corrie, and jokes that maybe she’s become ‘institutionalised.’

“I feel old now! I’ve been on the show for my whole adult life – it’s more than half my life, in fact.

“It’s quite scary, although you never have time to get sick of it.

“The core cast and crew tend to stay the same, and you feel like you’ve grown up together. Maybe I’m institutionalised!

“It would be really weird to leave, I’d probably be like a fish out of water,” she said.

In the same interview Samia also opens up about her ongoing battle with anxiety, and how she hopes talking openly about her disorder will help destigmatise mental health.

She revealed she no longer feels embarrassed or ashamed of it.

She also added that social media “shouldn’t project a perfect life and just put out a highlights reel”.

It was recently revealed that Samia had signed a contract to keep her at Corrie for another year.