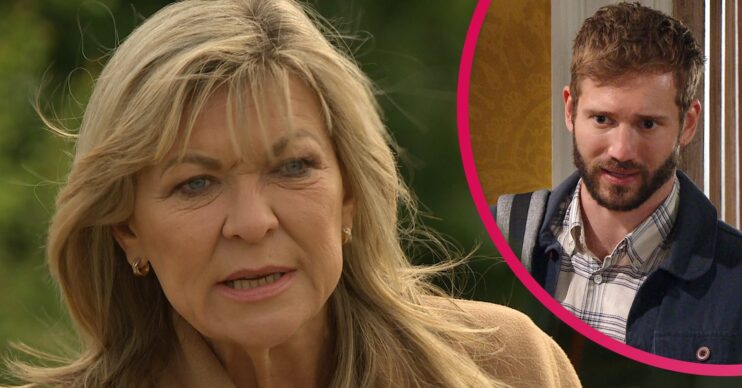 Kim Tate in Emmerdale, wants full custody of her grandchildren, but has she forgotten she was a terrible mother.

A few weeks ago Jamie, who is Kim‘s son and the father of Gabby‘s unborn child, drove into a lake.

His body was never found and he has been presumed dead, but Kim believes he could still be alive.

Now Kim wants to be the one to look after Gabby’s son, should anything ever happen to Gabby.

In tonight Emmerdale (Monday, October 11) Kim Tate suggested to Gabby that she should have a will drawn up that if anything happened to her, Kim have custody of Gabby’s baby, who is her grandson.

Read more: Emmerdale, Meena will be the one to die in super soap week, fans predict

However Gabby later overheard Kim on the phone talking to her lawyer, demanding they find anyway possible to prove Andrea (the mother of Jamie’s daughter, Millie) is unfit to be a parent, as she wants full custody.

But what is the whole point of her doing this? This is what Entertainment Daily soap writer Charlotte Rodrigues thinks.

I’m sorry but Kim needs a serious reality check if she thinks she could look after both of her grandchildren.

Of course, we know the will is only if anything bad should happen to Gabby.

However Gabby even said it herself that Kim would never let her leave the village, knowing she’s having a Tate baby.

But I can’t be the only one who finds her controlling behaviour over Gabby really weird.

Kim never struck me as the maternal type and while I do get that she obviously loves her grandchildren, it just seems odd that she wants full custody.

I get that Kim and Andrea have never seen eye to eye, but finding a way to make her seem like an unfit mother so she can have full custody is just cruel.

I mean Andrea is a much better mother than Kim.

It’s also worth adding that Kim has been in and out of prison many times, realistically she wouldn’t be given full custody.

‘Kim was a terrible mother, she’d be an even worse grandmother raising those poor kids’

Kim didn’t even look after Jamie properly growing up.

It’s known that around 2012, when Jamie would’ve been around 15/16, Kim went to prison and left Graham Foster to keep an eye on Jamie.

When he returned to the village in 2019, it became clear Kim was never really there. What makes her think she’s going to be able to look after a 7-year-old and a baby?

At the end of all of my articles, I do like to add what I think is going well with the plots.

I am excited to see the birth of Gabby’s son and what’s to come at Home Farm.

Also I want to say I think Claire King is doing an incredible job playing Kim and I can’t wait to see what’s to come.