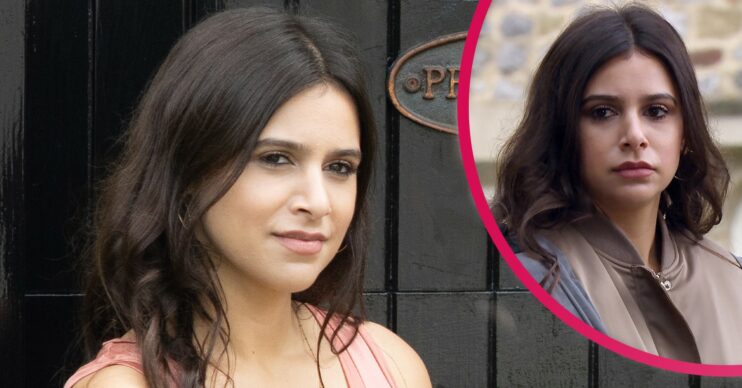 Emmerdale: Meena will be the one to die in super soap week, fans predict

Emmerdale fans are predicting that Meena will be the one to die in super soap week.

Earlier this month, Emmerdale released an October trailer which is set in a maze.

The trailer sees more than one character running scared as Meena stands in the centre wearing a hooded cloak.

David and Victoria can be seen running through the maze looking for each other.

Also seen running through the maze in terror is Andrea Tate. She is desperate to be reunited with her boyfriend Charles.

However Charles’s ex, Meena’s sister, Manpreet is also there too.

Charity and Mack are also in the maze and seem to be trying to get some time alone together before they hear a scream.

Also in the maze are Priya and Ellis. It’s known that the two have setting up a survival night at The Hop. But are they also in danger?

Emmerdale fans have a theory about Meena

While it looks like there are numerous characters that could be in danger from killer Meena, fans have a theory that it could be Meena who ends up dying in super soap week.

So it’s Meena being killed off then? #Emmerdale https://t.co/1oVbQgznp2

OK here I go again. I think the death in #emmerdale will be a twist and it be meena that dies. Then it will come to light she killed Leanne and her friend. The talk of the village for a week or so.

Speaking to Entertainment Daily and other media, Kate said: “It’s an adrenaline rush from the very start as twists and stunts come thick and fast and you can’t catch your breath.

“The glorious stunning landscapes are utilised and very focal, the brilliant Duncan Foster is brilliant to bring the scripts to life.

“The week will catapult viewers to the heart of this beautiful but very dangerous environment.

“There are jaw dropping stunts, rapids and waterfall sequences as we subvert expectations.

“The denouement is the massive maze. We love stunts but it’s not just about the ambitious and impressive stunts – at the heart of the week lie relationships, secrets, hearts broken and with Meena involved and hellbent on revenge on Victoria, not everyone will get out alive.”