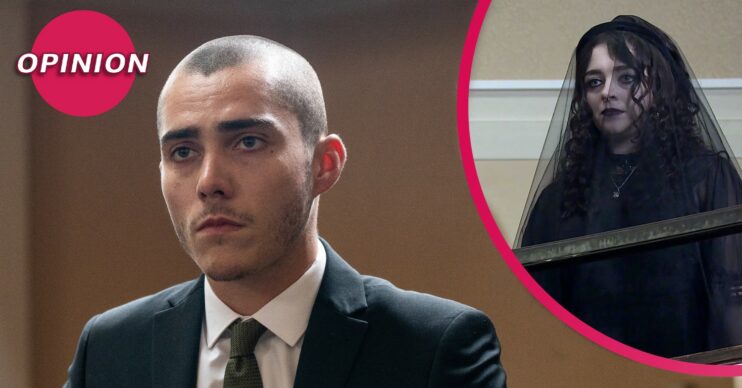 OPINION: Coronation Street: ‘How were the jury stupid enough to find Corey not guilty?’

What were they thinking?

After the onslaught, Nina was left badly injured and Seb sadly died. Later Corey and Kelly were arrested for his murder.

As Corey and Kelly’s trial started, Nina remembered on the night of the attack seeing Corey kick Seb and Kelly begging him to stop.

In tonight’s scenes, the jury finally came to a verdict. They found Kelly guilty and Corey not guilty.

The verdict is sure to upset many, but what does Entertainment Daily soap writer Charlotte Rodrigues think of the verdict? Keep reading.

Coronation Street: ‘How were the jury stupid enough to find Corey not guilty?’

Tonight’s scenes had me on the edge of my seat, and I can imagine it was the same for my fellow Corrie fans.

Corey was found not guilty for the murder of Seb and all I have to say is: “ARE THE JURY STUPID?’

I’m going to go through this piece by piece and point out just every bit of information that proves Corey is a murderer.

First of all, the fact he asked Asha to lie.

For those of you who may have missed this, when Nina and Seb were attacked, Corey was in a relationship with Asha Alahan (who has also dated Nina).

When he returned home after the attack he asked Asha to lie about his whereabouts, which Asha mentioned in court.

Secondly, Corey changed clothes, put them in a rucksack and threw his rucksack in the river. This was all caught on CCTV by the way.

Now if Corey hadn’t touched Seb, the blood splatters on his clothes would have proved he was innocent, so why get rid of them?

If he hadn’t touched Seb, he would never have panicked about throwing them away. The fact he got rid of them straight after screams guilty.

We also have Nina’s memory. She remembers seeing Corey kick Seb. Of course Sabeen tried to convince the jury that Nina’s memory could have been made up as she suffered head trauma.

However Nina has no reason to protect Kelly and would want justice for her boyfriend Seb.

Given all the evidence, how can the jury possibly think Corey is innocent? I think they all need their heads examining.

Corey comes from a rich family and his dad Stefan has very obviously pulled some strings to help Corey with the trial.

The fact that he had a professional footballer standing in his corner, it’s not hard to see Corey is just a pathetic boy relying on daddy’s money to get him free.

I understand a parent doing anything to protect their child, but let me tell you, if you teach your kids they can get away with murder (quite literally) once, they will kill again.

Perhaps if Stefan spent more time raising his son, teaching him how to be a good person, instead of throwing money at him, he wouldn’t be in this mess.

I’m not pinning the blame on the dad, but Stefan, you’re a terrible father. I’m not sorry.

A key piece of evidence missed from the trial

Another thing I wanted to point out was the fact a big piece was missing from the trial.

As Corrie fans know, Corey was released on bail after being charged. However he ended up breaching the terms of his bail.

A few months ago, Nina saw Corey having dinner with Tommy Orpington and told Tommy how Corey kicked Seb to death.

Corey then lost the opportunity to be represented by Tommy Orpington’s agent.

He then went to Roy’s cafe to have a go at Nina. After calling her horrific names, she threw his award to the ground, breaking it.

Corey then went to attack Nina once again but was stopped by Roy.

The police soon arrived and arrested Corey for breaching his bail conditions.

Seriously though, why wasn’t this brought up in court? The police literally caught him terrorising Nina outside of her home.

A good piece of evidence Imran could have easily used. He literally threatened and verbally attacked Nina again. WHY DID NO ONE THINK TO USE THIS?

‘Kelly deserves to be punished, but not prison’

Of course, we get to Kelly, who was found guilty of killing Seb and will be taken to prison.

While I don’t agree with what Kelly did, again it baffles me how they found her guilty.

Do I think she deserves prison? No. Do I think she needs to be somewhat punished for hitting Nina and her involvement? Of course.

Should she have been charged with murder? No.

As I like to do at the end of my articles, I would like to say a massive well done to the cast of Coronation Street, especially Mollie Gallagher, who brought home an NTA last night, and Sally Carman who brought home a TV Choice Award earlier this week.

Also to Maximus Evans who plays Corey. The fact that he can make the audience truly despise Corey just goes to show what a great actor he is.