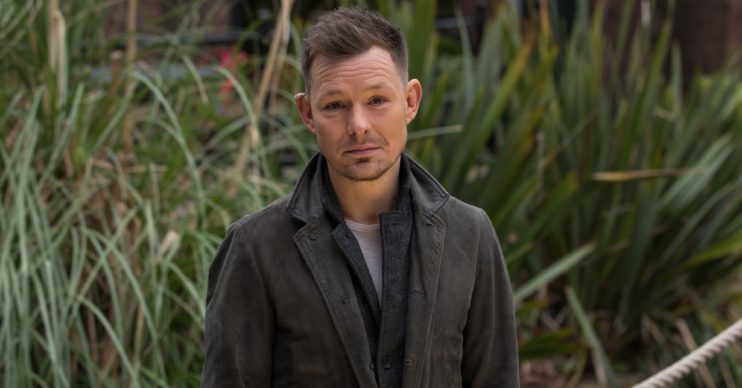 Hollyoaks fans left distraught as Kyle takes his own life

Darren found him in the restaurant

Hollyoaks fans have been left devastated as Kyle Kelly took his own life following a battle with depression.

Viewers have watched as Kyle has faced a mental health struggle for months.

Although partner Nancy hasn’t noticed anything is wrong and has been laying into him for using marijuana, Kyle has been seeking comfort in Darren Osborne.

Darren has also been depressed and Kyle was the first person to pick up on the signs. Although Darren didn’t then recognise the same signals in Kyle, Kyle has been taking strength from their friendship.

However, when Darren finally confided in his partner Mandy about how he was feeling, she felt Kyle wasn’t helping and urged Darren to cut ties with him.

Darren did so, but when he confided his problems in friend Luke, Luke belittled them and told Darren to ‘man-up’.

Turning back to Kyle for support, Darren went on a frantic hunt around the village for his mate.

But what he found will haunt him forever…

Kyle takes his own life in Hollyoaks

After rekindling their romance, Kyle had treated Nancy to a special family day, ending with a romantic meal at The Hutch.

But as an oblivious Nancy cut their celebrations short to go home and sort out Oscar, who was apparently having a tantrum, she had no idea what Kyle was planning to do.

Although Hollyoaks didn’t air Kyle’s death scene, we saw Darren enter The Hutch, shout out: “Kyle” and then stagger outside.

He called the emergency services and announced his friend had “killed himself”.

One shared: “Tonight’s episode of Hollyoaks really did hit me hard. Mental health in men does need more awareness and it is ok to not be ok.

“No one should ever be made to feel that alone they can’t go on any more. Well done Adam Rickitt [Kyle] you did brilliant with the character.”

Another added: “I’m quite the ice queen but tonight’s episode really got me needing to blink a lot because of something in my eye.

“Really didn’t expect it, Adam Rickitt you’ve been great in Hollyoaks . You’ll be missed but you really left a mark.”

“OMG sobbing I will miss Kyle,” said a third. “Amazing performance from Adam, made me laugh and cry. Thank you.”

Someone else said: “A heart-wrenching episode with Kyle’s suicide on Hollyoaks and Darren’s depression. I relate. So many people don’t understand or they don’t want to and respond exactly how Luke did to Darren which just makes it worse.”

“Darren falling down after calling the police to tell them Kyle’s dead is so heartbreaking,” said one more. “And finding him and us from outside the restaurant hearing Darren say ‘Kyle, Kyle’ so haunting.”

Another wrote: “Oh my god chills. So brilliantly filmed and acted and Darren’s found him after he’s ended his life and called up to say Kyle is dead. So heartbreaking.”

One more offered congratulations to Hollyoaks: “Congrats Hollyoaks on a beautifully sad and touching episode, was crying from the first few moments into it. Darren finding his body literally broke me.

“Adam Rickitt played the part of Kyle amazingly and from a mental health sufferer I’d like to applaud you all.”

What happens next in Hollyoaks?

Nancy has found out the devastating news. 💔 #Hollyoaks #DontFilterFeelings For more information on the issues raised in this storyline, please click the link for help and support: www.channel4.com/support

Hollyoaks has shared a heartbreaking aftermath clip on their social media as Nancy finds out what happened to her fiancée.

She is in denial, but can Darren help her see the truth?