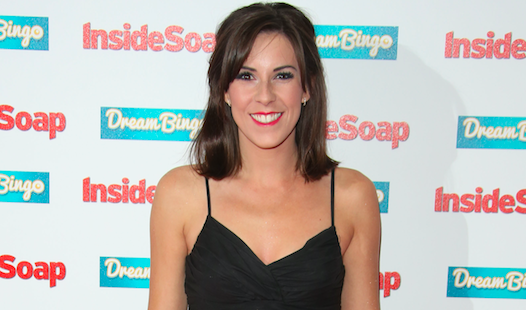 Former Emmerdale star Verity Rushworth has provoked a serious outbreak of twitching ovaries after sharing some adorable photos of her newborn son.

The 34-year-old actress welcomed the arrival of her second child in July, and has given her 12,7000 Instagram followers an update on the little fella’s progress.

The Bradford-born actress gave birth to Ethan Michael Shaw in the summer, and has been enjoying snuggles and sleepless nights ever since.

But this week, she told her fans the tot had slept through the night for the first time, as well as sharing a handful of gorgeous snaps of her little one.

Photos included one of Ethan dozing happily in his pram, comfy in a baby bouncer, crawling on the floor in a supersoft grey jumper with his name on, and in his mummy’s arms.

Later the same week, Verity shared the news that every mother longs to boast – that he had slept through the night.

Verity and her husband Dominic Shaw also have a daughter called Amelie, who was born in 2016.

Since leaving Emmerdale in 2014, Verity has gone on to star in a number of West End shows, including Kinky Boots, Hairspray, Chicago and Annie.

The mother-of-two also took over the role of Maria from Connie Fisher in The Sound of Music back in 2011, prior to her final stint in the ITV soap.

Emmerdale fans were devastated with her character Donna Windsor was killed on the show after she threw herself off the roof of a multi-storey car park while arresting criminal Gary North.

The beloved character, who had been married to Marlon, knew she was terminally ill when she took her own life.

At the time of her death, Donna was the third longest running character on Emmerdale.

Do you remember Donna in Emmerdale? Leave us a comment on our Facebook page @EntertainmentDailyFix and let us know what you think!