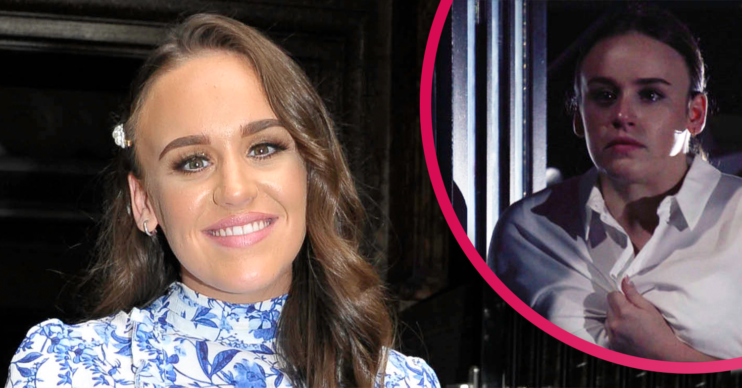 The teenager has been forced into sex by her boss

Bistro assistant manager Faye has been forced into sleeping with her boss Ray Crosby to keep her job in recent weeks.

And, last week, Faye was left terrified when he tried to rape her in the restaurant.

Only the arrival of her brother Gary Windass stopped Ray’s actions.

What will happen to Faye on Coronation Street?

Over the coming weeks, Corrie fans will see Faye struggling to come to terms with what happened.  And she will eventually become furious enough to want Ray to suffer.

However, playing the emotional and harrowing scenes has been difficult for actress Ellie, 19.

She said: “It’s been a difficult storyline to play because it is scary to think that there are people out there who are superior or in positions of power and they manipulate people as young as Faye.”

‘She goes along with whatever he says’

Ellie added: “Ray has given Faye this amazing promotion which she wants to build a career on. But because he is superior to her, he can easily take that away from her and she doesn’t want that so she goes along with whatever he says.

It’s so easy to be sucked in to that manipulation and people don’t speak up about it because, like Faye, they feel like no one will believe them.

“It’s pure manipulation because Ray has made Faye feel like she owes him her life.”

“Faye feels like she has come from nothing and now she has this great job where she is working in restaurants, in hotels, in bars but Ray has given her this job because he wants to manipulate her and use her as a pawn in his game.”

She added: “It’s so easy to be sucked in to that manipulation and people don’t speak up about it because, like Faye, they feel like no one will believe them.

“But sometimes when one person speaks up, it starts a chain reaction and others speak up too and that’s how these people get caught because people aren’t afraid to talk about what has happened to them when they see that it has happened to other people.”

She added: “Faye just wants to forget this ever happened. But as time goes on we are going to see that Faye wants Ray to suffer like she has.

“She is old enough to realise the situation that Ray has put her in is wrong. And it should be looked into. She wants justice.”

Can Faye take on Ray? Leave us a comment on our Facebook page @EntertainmentDailyFix and let us know what you think!