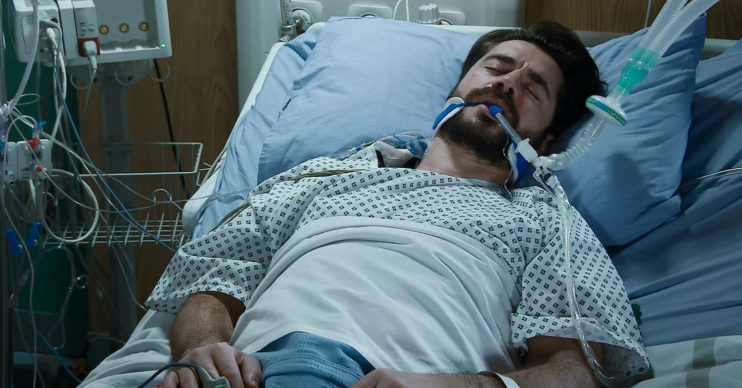 Someone close to Adam has attacked him

Coronation Street fans will be wondering if Adam is dead after the horror attack on his life, but the show has confirmed he will survive – at least initially.

Solicitor Adam Barlow was left on the floor of the Bistro in last night’s (Friday, December 11) episode of the ITV soap after being attacked from behind by a mystery assailant.

However, new spoiler pictures have revealed the aftermath of the attack.

In Monday night’s episode, Adam will be found unconscious in the Bistro by Debbie Webster and Ray Crosby.

Left in a pool of blood, they will call an ambulance for him and he will be rushed to hospital.

His family will be left terrified as it’s revealed Adam’s lost a lot of blood and his condition is critical.

Pictures show him hooked up to life support monitors as he battles to regain consciousness.

However, it does confirm that this isn’t a murder whodunnit.

The soap has revealed the four suspects in the attack on Adam.

In Wednesday’s (December 9) episode, Adam was forced to admit to Peter that he and Carla slept together. As Sarah was in the Bistro at the time, she also found out the truth.

Meanwhile, Carla and Adam began arguing over who’s to blame.

Adam soon headed over the Bistro for a drink. After refusing to leave, Ray Crosby left Adam the keys so he could lock up.

But he ended up going over to the Platts’ house to try and talk to Sarah.

The two argued and Adam headed back to the Bistro.

However on his way back, he got into an argument with Gary Windass.

After Gary wound him up, Adam threatened to tell the police about Gary’s involvement in Rick’s murder.

Back at the Bistro, Adam continued to drink. Meanwhile, viewers saw an anonymous person sneak in.

As the episode came to an end, viewers saw Adam Barlow sprawled out on the floor with blood coming out of his head.

But who do you think did it?