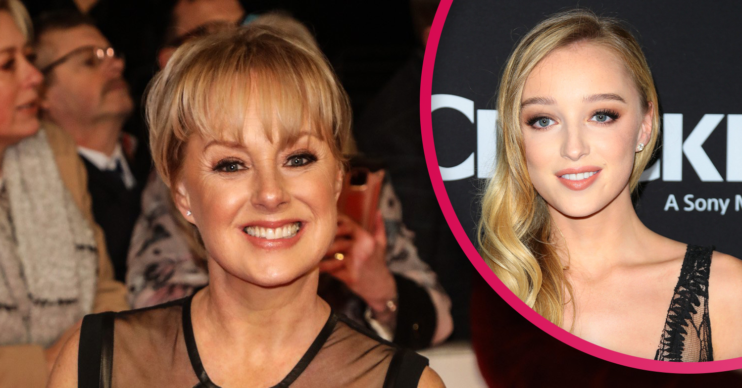 Phoebe will star in Bridgerton on Netflix from Christmas Day

Her daughter is set to star in Bridgerton on Netflix on Christmas Day and now Coronation Street star Sally Dynevor has spoken of her pride for her eldest child.

Actress Phoebe, the daughter of the Sally Metcalfe star, is set to appear in big-budget regency drama on the streaming service.

It will drop on December 25 and proud mum Sally is very excited.

What did Sally say about Phoebe in Netflix drama Bridgerton?

She told the Sunday Mirror: “I just want to say I’m very proud of Phoebe and, as a family, we are so excited to see Bridgerton on Christmas Day.”

It’s not the first time Sally has gushed about her talented Hollywood star daughter.

She said previously: “Phoebe decided she wanted to act when she was 12 or 13.

I’m very proud of Phoebe and, as a family, we are so excited to see Bridgerton on Christmas Day.

“My mother-in-law Shirley said to me: ‘You mustn’t dissuade her. Actors are the most wonderful people in the world and the most fun.’

“I thought, she’s absolutely right. And even if it’s very difficult, she’s going to have a great time.”

Sally added: “I was probably more nervous watching her in something than I’d ever been for me, but she’s doing okay.

“I am always telling her if you want to survive in this business, you have to have ­discipline and set aside days and nights to ­learn lines.”

What is Bridgerton on Netflix?

Phoebe plays Daphne Bridgerton, one of eight siblings caught up in a world of Georgian wealth, lust and betrayal.

But far from the usual regency drama, this comes from the creator of Grey’s Anatomy and Scandal.

Shonda Rhimes has created a world where diversity is the norm rather than the exception.

Phoebe is well know for her role in Waterloo Road as Siobhan Mailey and as Lauren in Prisoners’ Wives.