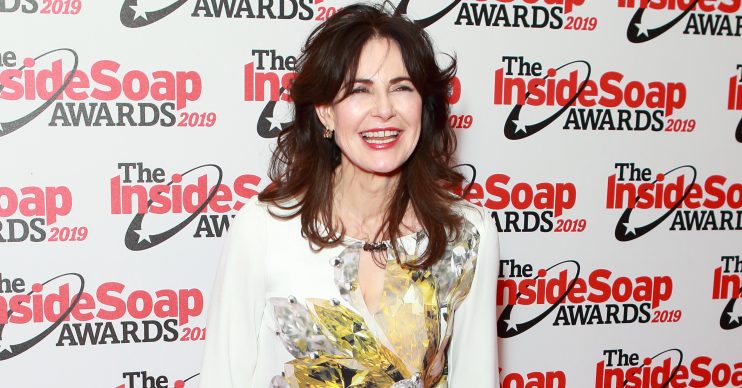 Fans have long suspected there is something strange about the farmhand

Sally Dexter, who plays Faith Dingle in Emmerdale has confirmed there is a shock twist ahead when it comes to the identity of Nate Robinson.

Fans have speculated for months that there is more to farmhand Nate than meets the eye.

And speaking to The Mirror at last night’s Inside Soap Awards, Sally revealed viewers are right to suspect Nate isn’t being entirely truthful about who he really is.

She told the publication: “Yes, there is a very shocking twist with Nate’s identity and it has dire consequences for my son Cain, for Moira, my daughter-in-law, and me.

“We have to come through a heavy storm and some of us might not make it. It was some of the most harrowingly emotional scenes I’ve ever done.”

Moira has been cheating on her husband Cain with Nate for some weeks now, and the raunchy scenes have left fans sickened.

Faith is set to find out Moira’s big secret next week and it culminates in some huge scenes later this month where Cain also discovers the truth.

Sally also confirmed at last night’s bash that she is departing the soap – and has already set her sights on landing a part in Line of Duty.

The 59-year-old actress is “taking a bit of a break” from the ITV soap to pursue other projects, and her character will leave in fallout from the “explosive” reveal of Nate and Moira’s affair.

Sally exclusively told BANG Showbiz: “I’m taking a bit of a break from Emmerdale, because of the explosive storyline that’s happening between Cain and Moira, and of course Faith and Nate.”

But Sally isn’t sure how long she will be away from the Dales for.

When asked if she wanted to take a break, she said: “Yes, I just want to see what’s around.

“I love Emmerdale and the team, I love my Dingle family very much.

“I don’t know how long the break is for at the moment.”

And she would love to land a role in some gritty dramas, such as BBC One show Line of Duty, which creator and writer Jed Mercurio has said could return next year.

She said: “Line of Duty would be great. Stuff like that I would love to do. That would be absolutely fabulous.

“Filming of all sorts I really, really love.”

But in the meantime, Sally is concentrating on her upcoming new role as Fan Marley, the late Ebeneezer Scrooge’s sister, in a production of Christmas Carol.

She added: “My mind is so obsessed with Christmas Carol right now, it’s very difficult to think of anything else.”