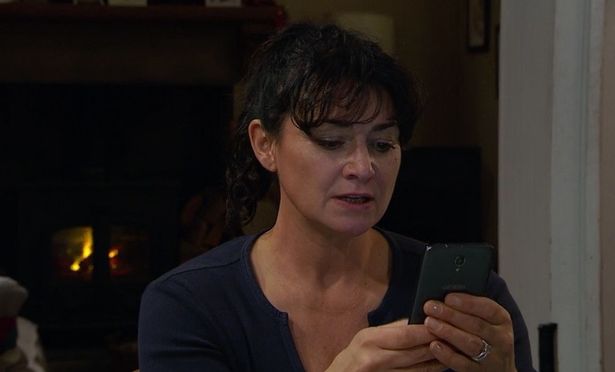 Will she regret it though?

Moira Dingle has vowed revenge on her former lover Nate Robinson, and Emmerdale viewers have criticised her “hypocrisy” and “self-pitying” behaviour.

On Thursday (January 2), Moira made the bold move to contact Nate’s mum Cara in the hope of causing Nate maximum grief.

Viewers know that Cain Dingle had a brief relationship with Cara when they were teenagers, and – unbeknownst to Cain – Cara became pregnant with his child.

Cara has since allegedly filled Nate’s head up with lies about his dad, leading the troubled young man to arrive in Emmerdale in a bid to wreak havoc.

She sickens me acting like the victim and it all self-inflicted!

And that he most certainly did, having a passionate affair with Cain’s wife Moira and breaking up their marriage.

Cain and Moira are now locked in a bitter feud, with Moira’s heavy drinking giving estranged husband Cain an excuse to threaten her with no access to their kids.

This week, Moira was so drunk she failed to hear her poorly son Isaac crying for help.

Then Vanessa had to take Isaac to the doctors because Moira was suffering from a killer hangover.

But when Nate told Cain about what had happened, he headed round there and vowed to keep their kids away from his wife.

Of course, Moira blamed Nate for everything and decided to take action by contacting Nate’s mum.

Finding her number on a farm document signed by Nate, Moira wrote to Cara via text message asking to meet her.

She wrote: “Hi, Cara. I work with your son Nate. We need to meet urgently, as I have things to tell you. Moira.”

Some fans now think Cara will make an appearance in the soap, but predict Moira will regret contacting her – hoping instead that she will embark on a relationship with Cain.

Many other viewers slammed Moira for blaming everybody but herself for her situation, with one saying: “She’s so annoying. Brought it all on herself. Remember how defiant and hard faced she was when Pete kept telling her to end it. Deserves all she gets.”

Another said: “Cain and Moira are perfect for each other. Always looking to blame someone else. Anyway, I hope Cara is hot.”

A third added: “She sickens me acting like the victim and it all self-inflicted!”

Moria is seriously getting on my nerves!! Stop drinking and complaining if you kept your nickers on would not be here!! Fix the hell up!! She’s cheated on every man she’s been with ole lush 🙄 over her

I really don't understand #emmerdale or #Eastenders like Sharon and Moira both cheated on their husbands.. But we are supposed to feel sorry for them now they've been caught out? Im confused! pic.twitter.com/fFPqyg0E6e

Moira is a mess. She was going to drive her child to the GP if it wasn't for Chas & Vanessa being there to stop her. She was still intoxicated (throwing up)!
She's in denial & blames everyone for her situation (even "nosey" Brenda) when she's created it all herself!@emmerdale

“She brought it on herself,” wrote one more. “It takes two, but the minute she bought sexy undies to wear for Nate she actively started pursuing him.

“Nate’s not blameless, but Moira’s drinking herself stupid. No one is pouring it down her throat and, until she straightens herself out, she deserves what she gets.”

Another blasted: “Moria is seriously getting on my nerves! Stop drinking and complaining. If you’d kept your knickers on, you would not be here! Fix the hell up!! She’s cheated on every man she’s been with.”

Will Nate’s mum Cara arrive in the village? And, if so, what will be the consequences?

Do you have any sympathy for Moira Dingle? Leave us a comment on our Facebook page @EntertainmentDailyFix and let us know what you think!