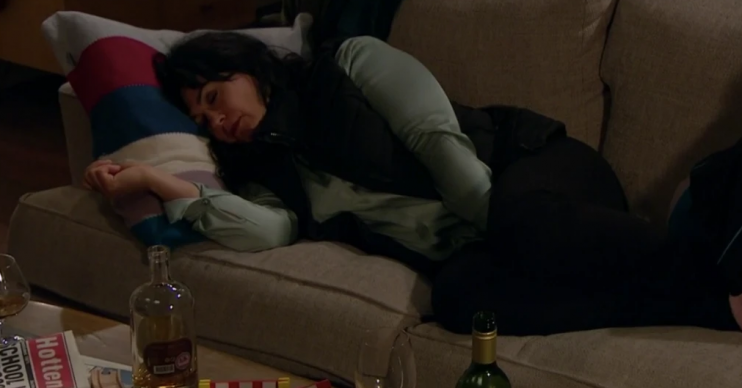 Emmerdale: Moira to lose son Isaac after getting drunk while caring for him?

Moira Barton’s New Year got off to a rubbish start… course it did… and the cliffhanger of Emmerdale‘s January 1 episode teased even more trouble to come.

As she laid on her sofa, passed out after another drinking session, her son Isaac desperately called out for her from upstairs…

It was a climax to a spectacularly disappointing day, which indicated 2020 would continue in the same miserable vein as the previous year.

The farmer started off the New Year trying to feel positive, pulling on her glad rags and slapping on the make-up to meet a prospective new client.

The meeting took place in The Woolpack and appeared to go well, despite Moira’s ex Cain sniping at her and accusing her of sleeping with every man she works with – in front of the supplier.

From what I hear I’m probably just too old for your tastes.

But things took a sinister turn as Moira brought the man back to the farm to show him the premises ahead of them signing the contract.

He immediately came on to her and, when she knocked him back, made a barbed comment about him being too old for her tastes.

“I know exactly what kind of woman you are,” he spat. “From what I hear I’m probably just too old for your tastes.”

She hid her misery when Matty came home and, as he mentioned going out, Moira assured she wouldn’t be drinking that night because she had her young son Isaac to look after.

But as her older son left, Moira picked up her full wine glass and said, ‘Hello friend’, as she took a glug.

Viewers were disgusted by how low she’d sunk.

One wrote on Twitter: “Crap Moira! Passed out drunk and Isaac needing her. Moira, Moira, Moira, what you doing, totally blown it now #emmerdale”

A third said, referring to an upcoming episode: “Moira deserves to die in that ditch if anything happens to Issac. #emmerdale”

Cain has already made it clear he doesn’t want her round the kids if she is drinking… will he take measures to ensure she can’t have access?