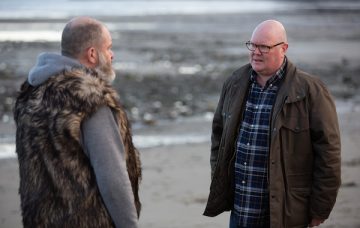 Emmerdale SPOILER: Paddy tracks down his dad in Ireland

Will he get the answers he's looking for?

Next week’s Emmerdale sees Paddy Kirk track down Bear Wolf in Belfast, but their reunion doesn’t come without drama…

Emmerdale fans will know that it was revealed recently that Bear Wolf is in fact Paddy’s biological father… leaving the vet on a mission to get some answers about his past from the only person who can help him.

Determined to take Paddy’s mind off his mystery past, Chas gives him the task of organising Jessie and Marlon’s honeymoon.

But when Paddy starts researching Belfast, where the newlyweds want to visit, he is thrown when he realises Bear Wolf is touring there.

The following day Jessie and Marlon are excited about their mini break to Ireland, while Chas catches Paddy looking at Bear Wolf’s website longingly.

Admitting he was thinking about following his estranged dad to Ireland, Paddy bites the bullet and asks Marlon if he can come along on his honeymoon.

Soon Jessie and Marlon’s romantic break for two has turned into a holiday for four, because Kerry Wyatt has also invited herself along, hoping to track her daughter Amy down in the same city.

But of course the trip doesn’t quite go to plan when they all arrive and there is a problem with the accommodation.

Paddy decides he’s not going to waste any time tracking Bear Wolf down and heads to a pub to meet him.

But when he gets there the locals mistake him for a wrestler and he is shoved into the ring and faced with a terrifying opponent!

Thankfully Bear Wolf is there to rescue him and the pair, along with Marlon, are forced to leg it out of the pub sharpish.

But as the trio escape, Paddy asks his dad for some answers and they soon have a heart-to-heart.

Will Bear Wolf be able to give Paddy the answers he’s so desperately looking for?

Do you think Paddy can have a good relationship with Bear Wolf? Leave us a comment on our Facebook page @EntertainmentDailyFix and let us know what you think!