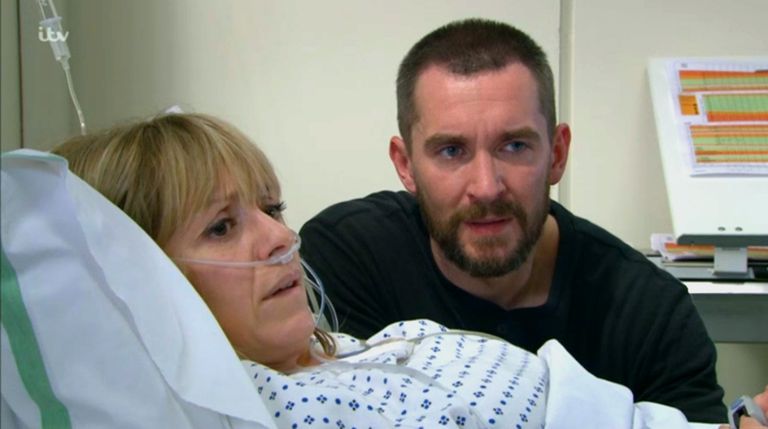 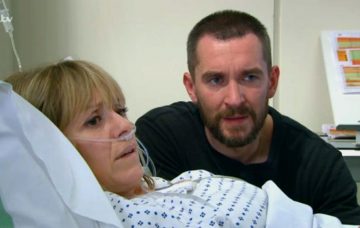 She is struggling in the aftermath of her accident

Following the horrific accident where she almost lost her life, Rhona Goskirk is reassessing where she stands with Pete Barton.

Having discovered during last night’s episode that he wants to have kids, and she doesn’t, the vet warned him she was struggling to see a future for them and next week asks him to move out.

After being knocked down and almost killed by a tractor driven by Pete, Rhona has been told she must have a hysterectomy.

Earlier this week, Rhona and Pete had decided on a duvet day but cut it short as Vanessa asked Rhona to cover her vet shift. Despite being very hungover, Pete decided to go into work on the farm too.

While moaning about his personal problems, Pete’s cousin Matty forgot to tell Pete that the tractor he was driving was faulty.

Rhona, who was also on the farm searching for missing cows, called Pete from the barn to ask where they might be and a distracted Pete didn’t realise that the brakes were not working on the tractor.

He swerved into the barn and unknowingly ploughed right into Rhona who was severely hurt as a result.

News about the hysterectomy prompted Pete, who was trying to reassure Rhona, that they could look at other options for having kids, such as adoption, further down the line.

This shocked Rhona as they had previously discussed them not having children, and she assumed Pete was fully behind that.

As she leaves hospital next week, the mum of one admits she is concerned about their future and asks him to move out so she can process the situation.

Pete is miserable at Rhona’s suggestion but puts on a brave face for her son Leo.

Despite it being her decision, Rhona is just as upset as Pete when he leaves.

The next day, tired and in pain, Rhona is tempted by her prescription of stronger painkillers which is dangerous territory for her with her previous addictions.

Later, Pete is upset that Rhona won’t let him back in the house and Rhona explains to a concerned Vanessa that she needs to keep Pete at arm’s length.

Vanessa, who can see how much Rhona needs Pete, tells him not to give up as Rhona needs him now more than ever.

Is their relationship over for good? Or can they work it out?

Do you think Rhona and Pete should split for good? Leave us a comment on our Facebook page @EntertainmentDailyFix and tell us what you think!