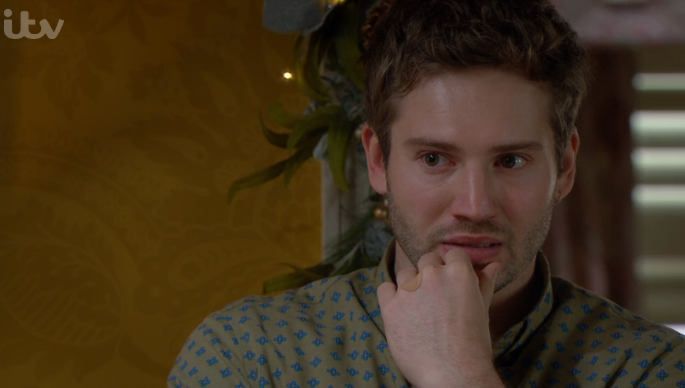 Is the kind vet the killing kind?

Fans of Emmerdale are sure Jamie Tate will be Graham Foster’s killer.

Graham is set to be murdered next week in a major whodunnit with multiple suspects, but fans are convinced that they already know who it will be.

And they think it’s Jamie because he will turn out to be like his mum Kim who has been shown to be a ruthless killer.

Writing on Digital Spy Forums one said: “Think it could be Jamie, to show he’s not that different to mummy dearest!”

Another agreed, adding: “I hope not, but I think you may be right. Kim was actually nice at one point, until the Emmerdale writers gave her a personality transplant, I wouldn’t be surprised if they did the same with her son but at an accelerated rate.”

Read more: Emmerdale fans heartbroken for Aaron as he leaves the village

A third said: “My money’s on Jamie on the basis that killing your mother’s husband and wife’s ex is a brilliant soapy mess and the aftermath would be messy, melodramatic and could be good if they write it well.

“I also think he’s ‘nice’ enough to get away with it in the audience’s eyes if he loses his temper and its an accident. Kim could find out and try to pin it on Jai to get her hands on his share of the business or something.”

Even actor Alexander Lincoln, who plays Jamie, agrees that Jamie had a dark side that could lead him to killing.

Speaking at a press day he said: “Jamie’s relationship has always been quite tenuous with Graham anyway but with the recent manipulation from Kim, Graham and Andrea, he’s fighting for Millie – she’s the only thing in his life now.

“Graham has set off this huge bomb of events that have cascaded and obliterated Jamie’s idea of his family. All he had was Andrea, Kim and Millie, but now two of them were part of this huge lie.

“Given the circumstances, I think anyone could kill. Jamie is very innocent, but given that this is about his family life and Graham seemingly coming in to ruin it for the sake of ruining it, yeah, for sure he could do it.”

Read more: Emmerdale viewers express concerns for Andrea’s health as she appears to have long-lasting cold

He added: “It’s always good fun to play it a little bit more dark. It’s something that I always strive for in anything that I do anyway.

“But I’ve also got a lot of love for Jamie, because he is so innocent and he wants to be different from his mum.

“It’s a really different take on the Tates, which is really nice to play. He’ll never lose his overarching naivety and innocence, that we’ve all grown to love.”