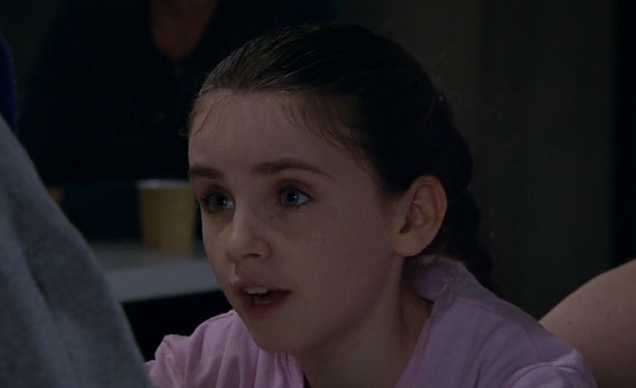 Viewers of Emmerdale have been left heartbroken as April Windsor broke down after seeing her dad Marlon in prison.

In last night’s episode of the soap (Tuesday February 11 2020) April finally got to visit Marlon.

Although she was nervous leading up to the visit, she was overjoyed to see her dad.

April told Marlon all about her ‘Free Marlon’ campaign with Mandy, showing she was determined to get the chef out of prison.

At the end of the visit, Marlon reassured the little girl that he hadn’t given up.

As April and Mandy left the prison, Mandy told the schoolgirl how brave she had been.

But April broke down saying: “I was just pretending. It’s horrible in here and he’s stuck here.”

However Mandy tried her best to assure April that they would get Marlon out eventually.

As the two both started crying, viewers were left heartbroken for April.

It's breaking me beks 😢😢

Mandy and April scence then 😭😭😭😭 #Emmerdale

Marlon has been arrested and charged with the murder of Graham Foster.

On the day Graham died, Marlon had a go at Graham for assuming he had taken April and his son Leo without asking permission.

Already on bad terms with Graham, Marlon was even more furious when he found out his ex-girlfriend Rhona, who is Leo’s mum, planned on moving to France with their son and Graham, who she was in a relationship with.

Before they left for their new life, Marlon arranged to meet Graham in the woods in order to sort things out between them, but Graham never made it to their meeting.

Graham was murdered by Rhona’s rapist ex-husband Pierce, who had recently been released from prison.

April is breaking my heart.

Marlon was soon arrested for Graham’s murder and charged when the murder weapon was found in his home.

Knowing he had been set up, the chef pleaded not guilty to the crime and is in prison awaiting trial in June.

Meanwhile, Mandy and April have set up a ‘Free Marlon’ campaign, hoping to make others see he is not capable of murder.

Will they be able to prove Marlon’s innocence?