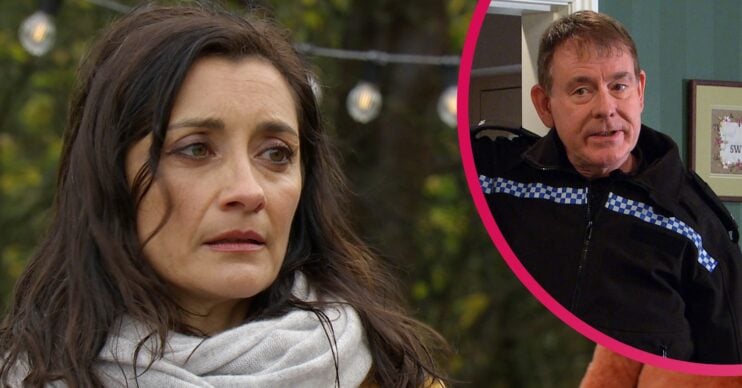 Meena has been holding her sister captive in her own bedroom

Emmerdale viewers have slammed the soap’s police force as they failed to look into Manpreet‘s disappearance and trusting Meena.

Since Manpreet was discharged from hospital, Meena has been holding her captive in Dale View as she started to get closer to the truth.

Meena told her sister about her crimes and planned to kill her too in order to keep her secrets.

Meanwhile Meena told Manpreet’s ex-husband Rishi and ex-fiancée Charles that Manpreet went to stay with her daughter Aiesha in Ibiza.

Read more: Who plays Vanessa’s son Johnny in Emmerdale? Has he been recast?

Sensing something was wrong, Rishi contacted Aiesha and was worried when he found out Manpreet wasn’t with her.

Rishi since contacted the police and in last night’s episode (Wednesday, January 5) the police began to investigate Manpreet’s disappearance.

Meena told them she had diverted her trip to a spa hotel in Malaga.

Later in the cafe, Meena agreed to talk to the police and Rishi again.

Meena said she spoke to Manpreet on the phone the night before as she rang from a pre-paid phone.

When the police asked her to call Manpreet, Meena rang a number but said no one picked up. However she said if she rang back she would get Manpreet to let the police know she’s safe.

Rishi suggest they check the house and Meena refused without Wendy’s permission. PC Swirling told Rishi to calm down and leave Meena alone.

But when Harriet revealed Wendy will be back very soon, Meena panicked.

These Police Officers are absolutely useless. My gosh! #Emmerdale

(So #Emmerdale Meena drags a body bag to the car and no one sees or anything and the police dont search the house. I want her caught already.

Why didn’t the police ask Meena for the number she used to supposedly dial Manpreet in Spain? #Emmerdale

Can the police not check if Manpreet got on a plane? This story…ugh. #Emmerdale

3 people from the exact same village dead in less than a year, multiple break ins, the bridge collapse, a huge explosion. Manpreet missing & still the Police don't stop to question whether it all might actually be connected? Helluva lot to happen one village is it not? #Emmerdale

Surely the police would ask what hotel she was staying in? And it’s not as easy as just jumping on a flight now with all covid tests etc #emmerdale

I wish Charles had asked for that number. The police should of asked for it. #Emmerdale

Back at Dale View, Meena was furious she had to change her plans and later in the dark she dragged a body bag to her car.

Meena then said to the body bag: “I’m sorry sis, I never wanted it to end like this.”