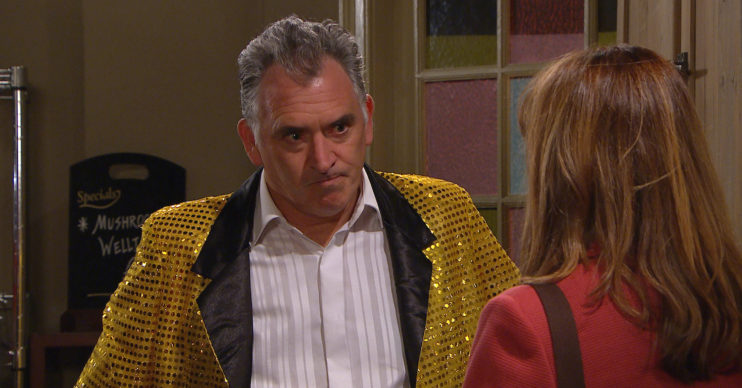 Bob had some harsh words for Wendy

Since Wendy Posner moved to the village, it has been obvious Bob has a crush on his new neighbour. Although Bob has told her how he feels, Wendy said she was happier on her own after her ex-husband treated her badly.

But last week, Manpreet picked up that Wendy had feelings for Bob and encouraged her to write him a letter explaining how she feels.

The letter mix up

However, in a mix up, Manpreet ended up putting the letter in with her husband, Rishi’s, over 40s check-up letter.

Read More: Who is Jermaine in Emmerdale? Jamie isn’t the first married man Belle has had an affair with

Believing Wendy had written the letter to him, Rishi showed it to his pal Bob. As he still likes Wendy, Bob was left shocked and upset.

What’s this new Bob all about?

Meanwhile, Manpreet told her colleague she should ask Bob if he got the letter. But when Wendy approached the bartender, he said some harsh words to her.

Believing she had a crush on married Rishi, Bob told her he no longer had feelings for her.

He then let rip into Wendy, leaving a trail of insults: “Look, whatever it is you’re intending to happen, you’re sadly deluded…

“You’re embarrassing yourself if I’m honest. And I’m really surprised at you.”

As Bob told her he read her letter, he asked her where her self respect was.

Wendy was left close to tears after the encounter. However viewers were stunned by Bob’s cruel behaviour as he is usually the nice one.

What's this new Bob all about? #Emmerdale

What’s next for Wendy and Bob?

Manpreet realised the mix-up and therefore explained the letter was for Bob leaving him thrilled.

However, it looks like it could be too late for him and Wendy. Have his harsh words put her off for good?