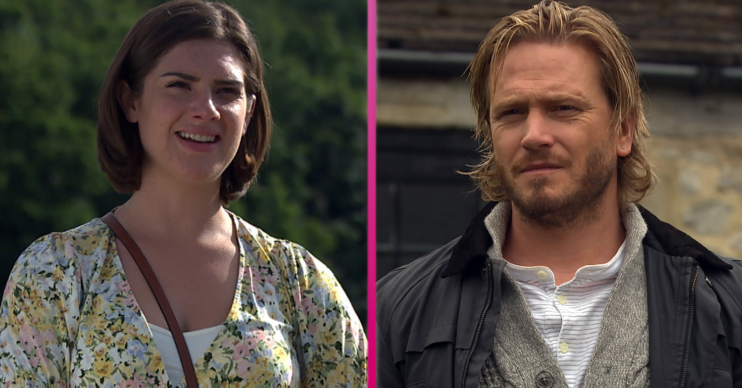 Victoria and David have been growing closer

Emmerdale stars Isabel Hodgins and Matthew Wolfenden were recently spotted filming a huge stunt, but could their characters Victoria and David be in danger?

In pictures obtained by Metro.co.uk the two actors appear to be filming stunts on a river.

Matthew can be spotted in a canoe and Isabel is in the water.

A source from the scene told the publication: “The scenes being filmed are clearly very big and from what I gathered they are for ITV’s super soak week.

“Matthew and Isabel were all there with cast and I could see there was a big stunt being filmed.”

Could Victoria and David be in danger?

The publication reached out to reps for comment but they don’t speak about future storylines.

Currently David Metcalfe is in a relationship with Meena Jutla. However he has been growing closer to Victoria.

David has no idea that Meena has previously killed her best friend Nadine. She also murdered Liam’s daughter, Leanna Cavanagh.

This week, she broke into Victoria’s house to mess around with her things.

However when Victoria came home early, Meena prepared to hit Victoria over the head with a heavy paperweight.

Soon Victoria figured out someone was in her home. She ran out and went to call the police, unaware it was Meena.

Later Meena received the news that her niece Aiesha had been in an accident in Ibiza. She flew out to Ibiza with her sister Manpreet to visit Aiesha.

However before she left, she hinted to Victoria she knew about her confessing her feelings for David.

Could Victoria be in danger from Meena?

Emmerdale continues tonight at 6.45pm for half an hour on ITV.

Have you been watching Emmerdale?  Leave us a comment on our Facebook page @EntertainmentDailyFix and let us know what you think!