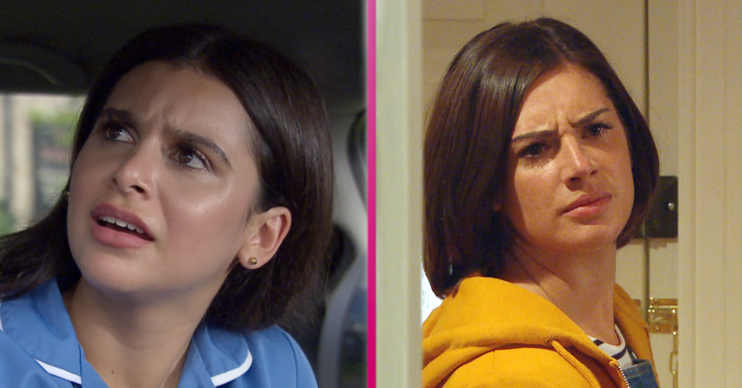 Meena broke into Victoria's house to mess with her things

This week, Meena stole keys to Vic’s house from her housemate Amy.

She soon began messing with Victoria’s possessions. However she was caught off guard when Victoria returned home early to look for Diane’s credit card.

Victoria was getting ready to leave when she heard a phone buzz. She warned the intruder that she would call the police and soon left.

Shortly afterwards, Meena left through the back door. However viewers were left asking the same question – does Meena ever go to her job at the Abbott Lane Surgery, where she is a nurse.

I at first thought Manpreet was mad because she had been trying to contact her all day because she didn't turn up for work.

How daft am I?

Does Meena ever actually do any work? #Emmerdale

Does Meena not work? Shes always stalking others #Emmerdale

After leaving Victoria’s, Meena watched Victoria talk to the police outside of her house.

Soon Meena was approached by her sister Manpreet, who was in a distressed state.

Manpreet told her sister that her daughter Aiesha had been in a moped accident in Ibiza and was in critical condition.

Manpreet asked her sister to come with her out to Ibiza for support, however she told her she had too much going on to join her.

Later in the pub, Meena told David the news about her niece. However Chas and Victoria were shocked to find out that Meena wouldn’t go with Manpreet to visit Aiesha.

David tried to convince Meena to go with her sister, but will she go?