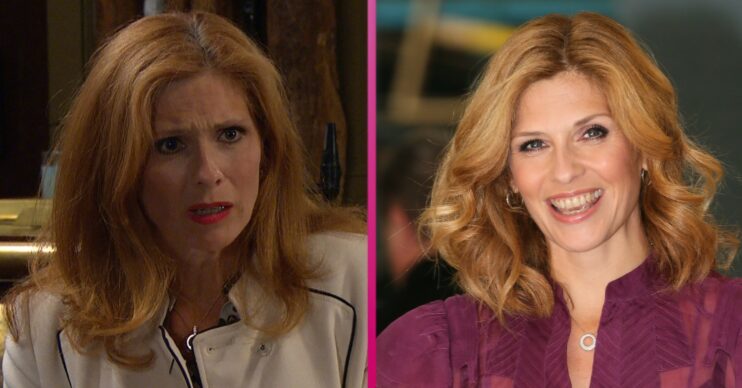 The hairdresser's ex has never been seen in the village before

Emmerdale star Samantha Giles has hinted a blast from the past could be coming to the village for Bernice Blackstock.

The Bernice actress, 50, has teased the arrival of the hairdresser’s ex-husband Charlie.

Soap fans know Bernice left the village in 2019 to reunite with Charlie in Australia.

It was only when he got back together with another ex that she came crawling back to her family in the Dales.

But with the lack of men in the village, Samantha thinks it’s only a matter of time until Charlie arrives.

Speaking to Inside Soap, she said: “I think it’s good that Bernice is single for a while, but I would like them to bring her ex-husband Charlie in.

“We could do with a few more men in Emmerdale! I think Charlie sounds like a male version of Bernice, so that would be really interesting.

“Remember, she was married to him for a really long time off-screen.”

Emmerdale’s Samantha Giles calls for more men in the village

Meanwhile Bernice is in for a shock soon when her mum Diane decides to leave the village for good.

Next week Bernice will discover her mum is planning to flee with pregnant granddaughter Gabby to save her from Kim Tate.

When Gabby is pressured by Kim to draw up a will leaving her custody of her unborn child should she dies, it alarms her.

And when she discovers Kim trying to get custody of Millie – she realises she isn’t safe.

Frustrated by her own situation, Diane suggests to Gabby that they flee the village to get away from their troubles.

Later Diane is alarmed to hear that Kim wants to amend Gabby’s will to say that she’ll get custody of Gabby’s baby.

Gabby and Diane meet Bernice at the Woolpack and Bernice is shocked to learn of Diane’s plan to move to Portugal.

Read more: Emmerdale characters who need to return to save the soap

Later Diane and Gabby are thrilled when Bernice suggests she moves to Portugal with them.

But they remind her she has to keep quiet about Gabby’s plan to leave the village.

Will Bernie be able to keep quiet?