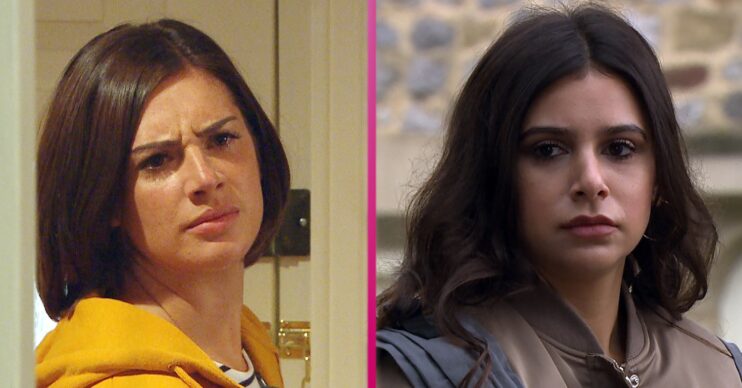 Emmerdale SPOILERS: Victoria and Chas grow suspicious of Meena as her jealousy increases

Meena gets some news about her niece Aiesha

Meena has been growing increasingly jealous of David and Victoria’s friendship, but are people starting to notice her odd behaviour?

In next week’s scenes Meena steals the keys to Victoria’s house from Amy.

When the coast is clear, Meena lets herself in and begins messing around with Victoria’s things.

However she soon hears the front door go and Victoria enters her house.

Meena grabs a nearby paperweight, ready to use it.

She manages to keep out of sight but her phone buzzes at just the wrong time.

Victoria realises someone is in her house and rushes out, threatening to call the police.

However Meena is un-phased and calmly heads out of the back door.

Later on Main Street, Manpreet tells Meena that Aiesha has been taken into hospital in Ibiza and is in critical condition.

As Manpreet begs for her sister’s help, Meena struggles to tear herself away from keeping an eye on David and Victoria.

Later at the Woolpack, Meena continues to keep an eye on Victoria as he briefs PC Swirling on the break-in.

However her behaviour starts to grab the attention of Victoria and Chas.

They’re both suspicious about Meena’s reluctance to do the right thing by Manpreet and Aiesha.

David tries to convince her that she should be there for her sister.

Soon Vic’s paperweight falls out of Meena’s bag in front of David. Will she be able to cover or will David notice it?