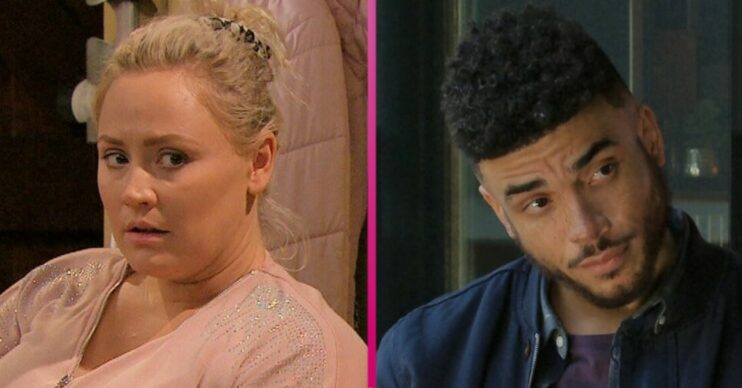 In Emmerdale next week, Tracy Metcalfe is going to make a final decision about cheating Nate Robinson.

New mum Tracy discovered farmer Nate had spent the night with another woman this week.

She thought he had been on a night out with Billy Fletcher – and he had until Billy left.

According to Nate he broke his phone and was unable to call a cab to take him home.

So instead he stayed on a random woman he met called Fiona’s sofa for the night and headed home the morning after.

Read more: After EastEnders’ Denny is revealed to be a dad, the biggest who’s the dad shocks in soap!

His lies were uncovered when Billy tried to cover for him insisting he stayed at his house – before Ellis unwittingly exposed them both.

Next week Nate’s dad Cain will try to convince Tracy to believe Nate’s story – but it backfires.

However after realising that Cain knew about Nate’s night out – she’s devastated.

Emmerdale couple Tracy and Nate over for good?

And after telling him to keep out of their business she comes to a decision.

Summoning Nate she tells him it’s time he moved out – ending their romantic relationship for good.

Will Nate try to convince her to take him back? Or will he seek out Fiona to explain what really happened?

Who is Fiona in Emmerdale?

Fans are already suspicious about Fiona and who she really is.

They are convinced she is actually Naomi – Charles Anderson’s secret daughter.

A few weeks ago, Charles met up with his ex-wife Esme, who is the mother of his son Ethan.

Charles hadn’t seen Esme since she left him and Ethan around 20 years ago.

However Esme explained one of the reasons she left was because she was struggling to cope with Ethan and found out she was pregnant.

When they met up, Esme told Charles she was pregnant and gave birth to a daughter Naomi after she left him.

However Naomi was put up for adoption. Esme then told him she met up with Naomi last year and they’ve started to build a relationship.

Do you think Fiona could be Naomi?

Do you think Emmerdale mum Tracy will regret dumping Nate? Leave us a comment on our Facebook page @EntertainmentDailyFix and let us know.