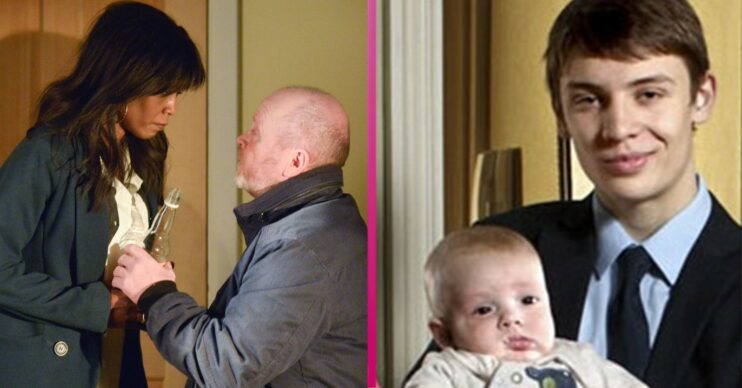 After EastEnders’ Denny is revealed to be a dad, the biggest who’s the dad shocks in soap!

Who's the dad is a tried and tested plot in soapland

EastEnders has dropped a huge shock this week with baby Alyssa and Denny Rickman.

But with the father being revealed as the dead teenager it’s the latest in a long line of shock who’s the daddy plots.

Here are some of the most memorable.

Years before THAT video, Dirty Den was a dirty, dirty man for other reasons.

In a shocking whodunnit, very old landlord Den was discovered to be the father of teenager Michelle Fowler’s baby Vicky.

It was the original shocking reveal – one that has been copied but never surpassed in soapland.

The most fertile man in soapland struck again – this time doing the impossible and getting Leanne Battersby pregnant.

Leanne was told years ago that she would never be able to have a child with her medical conditions.

Read more: EastEnders: What happened to Dennis Rickman Jr? Is he Alyssa’s father?

That was until she had a drunken one-night stand.

One that the soap didn’t actually show – so when Leanne told Steve there was confusion all around.

If you had to guess the chances of getting pregnant after romping with both Phil Mitchell and Kush Kazemi – Kush would probably win.

But not in EastEnders.

In Walford you can forget the young, virile and strong Kush and instead accept that a very drunken romp on a sofa with an absolutely hammered alcoholic who remembers nothing of it will be the one that gets you pregnant.

Denise was horrified when she realised that’s what happened.

But it was nothing compared to Phil – who had literally no recollection.

When Charity Dingle was banged-up for insurance fraud a few years ago, no one expected her to give birth during her sentence.

But give birth in prison she did – and sadly baby Moses was gravely ill.

So it was a bigger shock when the father turned up at the hospital to visit his ailing offspring.

It was an even bigger shock when the father turned out to be Charity’s daughter Debbie’s boyfriend Ross Barton.

One bunk-up before prison and they’re locked for life.

This was not only a huge shock but a moment that is remembered in EastEnders history for the collective confusion of the audience.

When Heather Trott got pregnant it was a confusing time.

Read more: Where is Libby Fox in EastEnders? What is actress Belinda Owusu up to?

No one knew who the baby’s father was – nor when he was conceived.

So when baby George was revealed to be teenager Darren Miller’s baby, it’s safe to say that EastEnders had many people shocked that night.

Leave us a comment on our Facebook page @EntertainmentDailyFix and let us know what you think about EastEnders revealing Denny as the dad!