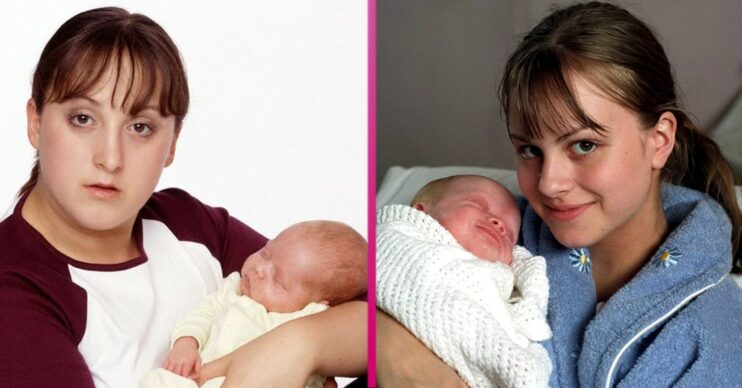 After EastEnders’ Denny Rickman becomes a dad at 13, soap’s most shocking teen parents

The soaps are stuffed full of teen parents

The schoolboy apparently fathered baby Alyssa shortly before he drowned In the Thames.

But he’s not the first teen parent in soapland – and he won’t be the last.

But yes, it was Sarah Lou, the angel-faced 13 year old sitting opposite her mum in a doctor’s office with a positive pregnancy test and one hell of an explanation due.

It was the storyline that rocked the cobbles – and the nation.

The first of many teen pregnancy storylines – and one that showed that it isn’t the end of the world.

After all raising Bethany was easy – not like she ended up the victim of a grooming gang, serial killers or potential kidnappers.

Let this be a lesson to all teenage trumpet players about the dangers of putting down that instrument.

You never know what you’ll pick up in its place.

In Sonia’s case it was baby Bex.

Who despite a custody battle, being adopted out and disappearing – managed to make her way back to her parents.

And she had a very different experience to the OG.

She hid her pregnancy and planned to give birth, abandon her baby and go on with her life.

But when she went into labour, she screamed for her parents and ended up welcoming a healthy baby girl.

However she was desperate to put the baby up for adoption, but was talked out of it by mum Anna.

Months went by and Faye realised she couldn’t cope with being a mother so soon and begged for Miley to be adopted.

However dad Jackson’s parents offered to raise her for her.

Sadly the child was called Miley – and her paternal grandparents decided to move abroad without telling Faye, leaving for good.

Now if only they could change her name.

She was born from a fling between mum Charity Dingle and dad Cain Dingle when they were both teens.

Though instead of her cousin – she picked Andy Sugden as her baby’s father – even though she was just 15 and he was an adult.

With Sarah now over 16, she’s well overdue her own child!

Corrie went for a hatrick two years ago when Amy Barlow discovered she was pregnant.

But unlike Sarah Lou or Faye Windass, headstrong Amy sought out adult help for her very adult problem.

However her parents Tracy and Steve had their own ideas and decided they would adopt the baby.

Amy later had an abortion – but lied at first claiming it was a miscarriage.

When the truth was revealed the soap dealt with the family dynamics brilliantly and showed them all supporting each other.