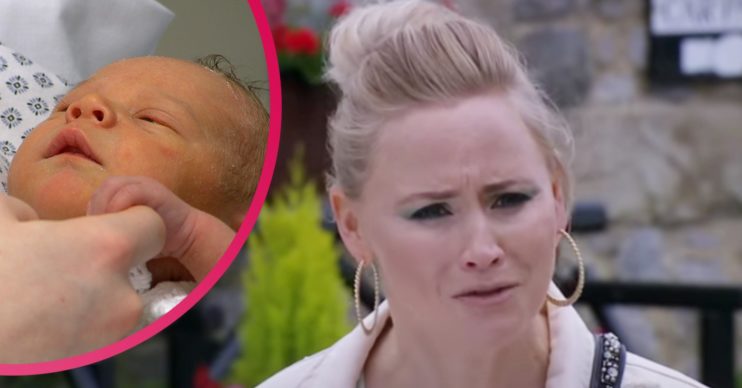 Emmerdale’s Tracy Metcalfe will make a horrifying mistake next week that could kill her daughter Frankie.

The new mum has been seen to be struggling with raising a newborn baby.

Viewers have watched over recent weeks as she has become tired and irritable, understandably so, under the pressure of the baby.

However next week things take a dark twist when Tracy almost lets her baby die.

She will be chatting in the village with a friend with Frankie in her pram when Tracy will become distracted.

Forgetting to the put the brake on the pram, Tracy lets go of the handle and doesn’t realise Frankie is rolling away.

It’s too late for her to save her but fortunately for her midwife Wendy Posner swoops in and saves Frankie from being killed.

Tracy’s horrified at what could have happened and harshly blames herself.

But is there more going on?

Fans are becoming increasingly convinced that Tracy is suffering from postnatal depression.

She has been seen to struggle badly and lash out at partner Nate Robinson.

Tracy was also convinced there was something seriously wrong with Frankie over a hernia.

It has led fans to become convinced something is seriously wrong.

One said: “#Emmerdale Does Tracy have some form postpartum depression or something? Or has she always been this way?”

A second said: “Tracy is experiencing postnatal depression isn’t she? Hearing her talk about how lonely she feelsFace with cold sweat #Emmerdale”

A third said: “It’s called post natal depression Tracey and you can get treatment #Emmerdale”.

However, others have praised the soap for showing that motherhood isn’t always a joyful adventure.

One said: “Tracy’s storyline on @emmerdale is so refreshing to see on a soap! Not every new mum experience is sunshine and smile.”