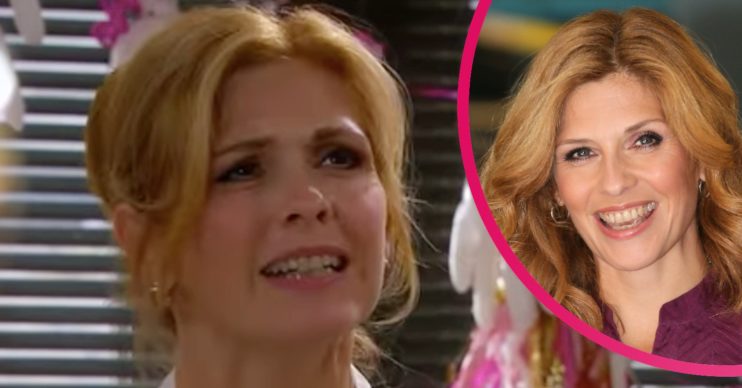 Bernice is back with a bang!

Samantha Giles quit her role as Bernice Blackstock on Emmerdale some 18 months ago.

But the soap actress, 49, is now heading back to the ITV soap.

Indeed she took time away from Emmerdale to focus on other projects – including her writing career.

Read more: Who was Carl King in Emmerdale? Why did he die?

Why did Samantha Giles leave Emmerdale?

Samantha says she quit to focus on her love of writing.

The actress is now a bestselling author.

Read more: Emmerdale’s Kim Tate to be caught up in ‘shooting drama’

She told Metro: “I certainly needed to have a break, I was doing a lot of writing.”

She added that she’d also got tired of her long and sometimes difficult commute from Liverpool.

While in September 2019 Bernice announced via Twitter: “After 7 fabulous years I am shortly to be hanging up Bernice’s aprons and leaving the dales to pursue other creative projects. I will miss all the friends I’ve made on the show, but I’m very excited to be moving on to pastures new.”

But she says she is keen to return as she felt Bernice has more stories to tell.

What was Bernice’s exit storyline?

The character left Emmerdale to tend to her ex in Australia.

The father of her daughter, Dee Dee, was badly injured in a car accident.

And Dee Dee argued that her mother had never put her first.

As a result Bernice called off her wedding to Dr Liam Cavanagh and fled to Australia with her daughter.

Samantha says she doesn’t see a reconciliation with Liam once she’s back in The Dales.

She explained: “She moved on quite quickly when she went to Australia and forgot about him.

“I think that coming back, it’s more to do with her pride: the fact that he is with somebody else. ‘How dare he?’ – that he should be falling at her feet begging her forgiveness and to try again, but he’s not.”

Liam is set to be stunned by Bernice’s unexpected return – as will be much of the village.

When is Bernice back on the soap?

Bernice is expected to make her grand return on Thursday’s episode.