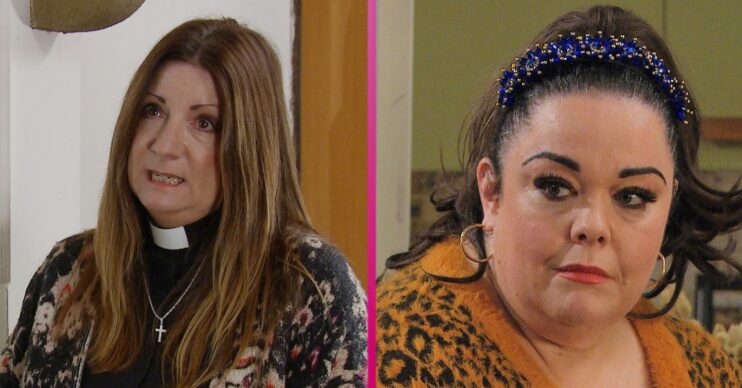 Meanwhile Dawn is horrified to see Lucas has gone missing and Mandy decided to support Vinny.

After murdering 18-year-old Leanna back in July, Meena stole Leanna’s ring that she was given by Jacob Gallagher.

Meena has been keeping it in her ‘bits box’, which is where she keeps the rest of the evidence from her murders.

Tonight Meena’s disrupted by Noah at the B&B. He spots Leanna’s ring on the floor and later steals it to give to Chloe as an early Christmas present.

In last night’s episode (Monday, December 20) Dawn’s ex-boyfriend Alex turned up in the village and introduced himself to Lucas as his dad.

Dawn was furious at Alex, but eventually agreed to give him the chance to get to know his son.

When Alex was on his own, Meena came over and told him Harriet was an alcoholic and Dawn was still on drugs.

Tonight Meena accuses Dawn of neglecting Lucas and urges Alex to take him away.

Dawn is terrified to realise that they’ve disappeared and Billy vows to help her find her son.

Billy and Dawn share an emotional moment. When Dawn kisses him, he admits it’s what he’s been waiting for.

As they share their love for one another, Billy knows he has to tell Meena the truth.

Read more: Has Lucas in Emmerdale been recast? Who plays Dawn’s son now?

Mandy urges Sam to make amends with Lydia. Soon Mandy promises to back Vinny up in his campaign to free Liv.

Harriet reveals to Charles that she’s planning on leaving the church and re-joining the police.