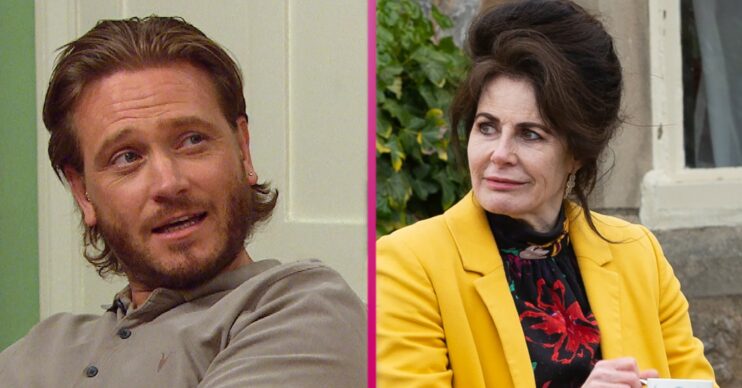 What has Meena got planned?

Emmerdale spoilers for tonight reveal Pollard tells Faith she needs to tell her family the truth.

Meanwhile Meena plots to get Jacob out of the village.

This week, Brenda opened up to Pollard and explained that she feared her cancer had returned.

Faith begs Pollard to keep her secret from her family until she knows for sure what she’s facing.

Pollard explains that he sympathises, but won’t throw away his relationship with Brenda.

He tells Faith she needs to come clean to Brenda and her family today, but will she?

Meena plots to get rid of Jacob

Meanwhile Meena is furious that her plans to get rid of Jacob haven’t worked so far.

When Meena gets wind of Leanna’s travel plans she wonders if she can convince Jacob to go travelling too.

Meena plots to get Jacob out of the way.

What is Ben hiding?

Earlier this week, Aaron and Liv were taken aback when a drunk man tried to start on Aaron in the pub.

Later Liv was confused when she saw Ben putting the man in a taxi.

She confronted Ben in front of Aaron later and he claimed it was another man he was putting in a taxi.

Later things got flirty between Aaron and Ben, however Ben was distracted by a phone call.

He claimed it was from one of his housemates and there was an emergency at his place.

He didn’t want Aaron to come with him. Could he be hiding something?

Emmerdale airs tonight at 7.30pm on ITV. If you want to watch tonight’s episode early or catch up on this week’s episodes, they’re available to watch on ITV Hub.