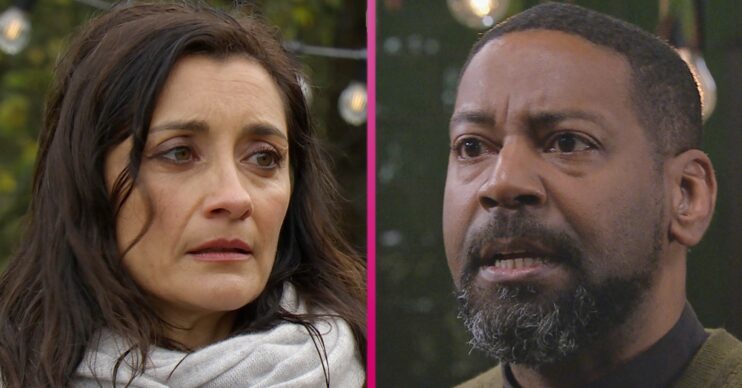 What will Manpreet do?

Meanwhile Nate tries to rope Ryan into a drinking session, but is he trying to cover something?

A few weeks ago, at her plea hearing, Meena pleaded guilty to all of her crimes except the murders of Leanna Cavanagh, Andrea Tate and Ben Tucker.

Manpreet realised she would need to testify and had a panic attack.

Her boyfriend Charles urged her to go to the doctors, but she ended up driving into the woods.

Soon Manpreet became so upset she ended up abandoning her car and phone and walked off into the night.

The next day, her ex-husband Rishi found her and she told Liam she couldn’t testify in court.

Tonight Manpreet reconsiders her stance on testifying. Will she help Liam, or is it all too much?

Nate tries to distract himself

When Nate’s plans to see Frankie fall through, he tries to rope Ryan into a pub session to distract himself from missing his daughter.

The end for Charity and Mack?

In last night’s episode (Thursday, March 31) Mack brought Charity back to the village after Moira abandoned her in the middle of nowhere.

When he brought her back, he confronted Charity and Vanessa about their near-kiss.

Charity tried to tell Mack how much he means to her saying he clearly cares about her too or else he wouldn’t of brought her back.

But he claimed he only did it so he could publicly humiliate her.

What does this mean for Mack and Charity?

Read more: Emmerdale: Is Mackenzie back for good? Will he and Charity get back together?