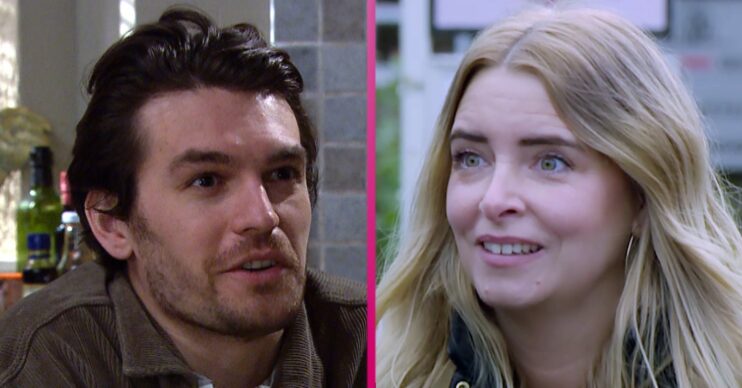 Emmerdale: Is Mackenzie back for good? Will he and Charity get back together?

Mack made his return to the village

Emmerdale character Mackenzie Boyd returned to screens in tonight’s episode (Thursday, March 31), but is he back for good?

Mackenzie left the village a few weeks ago to go to Scotland after Charity refused to let him move in with her.

But he returned to screens tonight. Is he back for good? And will he and Charity ever get back together?

Emmerdale: Is Mackenzie back for good?

Earlier this week, Moira found out that Charity nearly kissed her ex-girlfriend Vanessa after firing Mack from the pub.

In tonight’s scenes, Moira agreed to drive Charity to see Mackenzie so they could talk properly, but she purposely left Charity’s bag behind.

In the middle of nowhere Moira pulled over the car and an argument with Charity started.

Moira left Charity on the side of the road, but when she returned to the village, Vanessa and Chas questioned where Charity was.

She eventually told them where she left Charity.

Later Charity was shocked when Mack pulled up alongside her on the side of the road.

He revealed that Moira gave her the location where she left her and he eventually agreed to take her back to the village.

When they returned, Moira came into the pub and Mack confronted Charity over her near kiss with Vanessa.

Mackenzie accused Vanessa of trying to get revenge on him and had a go at Charity for not telling him the truth.

Charity tried to tell Mack how much he means to her saying he clearly cares about her too or else he wouldn’t of brought her back.

But he claimed he only did it so he could publicly humiliate her.

What does this mean for Mack and Charity? Is he staying in the village?

Is Mackenzie back for good?

Entertainment Daily can confirm that Mack is back for good.

However it has not been revealed what is next in his storyline.

Is this the end for Charity and Mackenzie?

It hasn’t been revealed what’s next for Charity and Mackenzie but given how upset he is over Charity and Vanessa’s near-kiss, it looks like they won’t be getting back together anytime soon.

However Charity isn’t one to give up easy, so maybe a reunion could happen eventually?