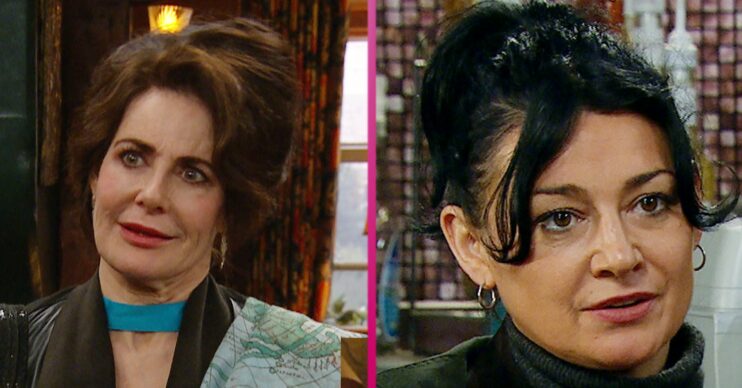 Only Moira knows about Faith's diagnosis

Emmerdale spoilers for tonight (Tuesday, May 17) reveal Faith makes a huge decision after her devastating diagnosis.

Faith was recently told her cancer had come back.

After getting into arguments with many of the villagers, including her own children, she’s keen to make amends.

A couple of weeks ago, Cain and Chas were left furious with their mother after she slept with Dan Spencer.

In last week’s scenes Faith tried to make amends with her children but they refused to listen.

She was upset and picked a fight with Dan’s daughter, Amelia.

When Faith ended up offending the teenager, a big argument broke out in the street between Faith, Amelia and Dan.

Faith ended up in a prison cell but was eventually released.

Moira went to speak to Faith about her behaviour and Faith revealed what had really been bothering her – she suspected her breast cancer had returned.

Later Moira went with Faith to a hospital appointment and the results of her test confirmed her cancer was back and although it was treatable, it isn’t curable.

Faith has refused to tell her kids about her illness.

Afterwards, Moira and Faith were horrified to learn Chas and Cain were in a car accident.

Luckily they both survived but Faith was determined

Although Chas has now forgiven her mother, Cain is still furious.

Will he forgive her?