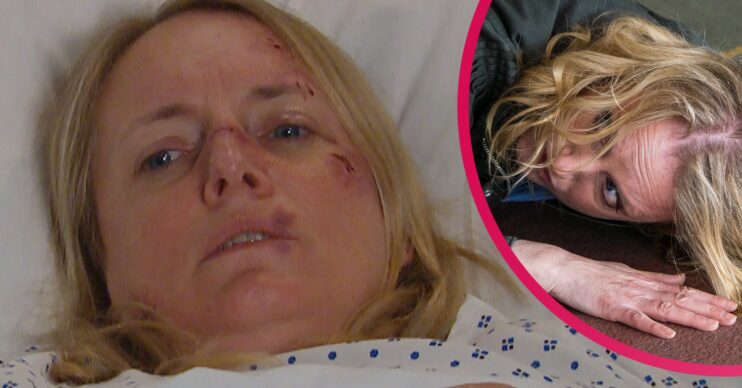 A night out takes a horrible turn

Emmerdale spoilers for next week reveal the dramatic start of a big new storyline as Nicola is savagely attacked on a night out and left for dead.

Nicola and Bernice head out to a bar with Laurel in the upcoming episodes of the ITV soap.

The sisters have been a loggerheads recently over council business, with Nicola stealing Bernice’s ideas and passing them off as her own.

Laurel hopes a night out can help smooth things over, but its not as easy as she thinks.

When things don’t quite go to plan on the night, Nicola heads off early.

However, on her way to the car she’s accosted by a group of teenage girls.

A terrified Nicola is mugged and beaten, and the gang leave her lying on the ground, bloodied and unconscious

Nicola is taken to hospital and wakes up with Bernice, husband Jimmy and dad Rodney by her side.

When questioned later about her attack, a groggy Nicola says she can’t remember anything.

But Nicola is too embarrassed to admit the truth – that she was set upon by a group of teens.

Later, the truth about Nicola’s attack is revealed after Gabby spots a video online.

The girls have posted footage of Nicola’s ordeal.

Jimmy realises why Nicola has been playing dumb, and his heart breaks for his wife knowing that she feels humiliated on top of her physical injuries.

Later, Nicola tells all to Harriet.

Nicola confesses her fears that the girls might try and track her down as they have her driving licence with her address on.

She reveals she’s terrified that they might hurt her kids.

Nicola also confesses that during the attack she thought she might die.

Meanwhile, Jimmy looks on, realising how broken his wife is.

Can Nicola ever recover from this terrible trauma?