No one does sourpuss as perfectly as Emmerdale's Nicola King.

Played by Nicola Wheeler she’s been a mainstay since her first appearance in 2001 even when she's not had that much to do.

With her frequent moaning and scheming she's not always had our sympathy but she's shown courage and fortitude when the soap fates have been against her.

She recovered from her injuries in the Mill Cottage fire and a devastating miscarriage.

Her love for Jimmy might be deeply buried but it's genuine. And as our potted history shows he's tested her patience on many occasions.

Who are Nicola King's parents? 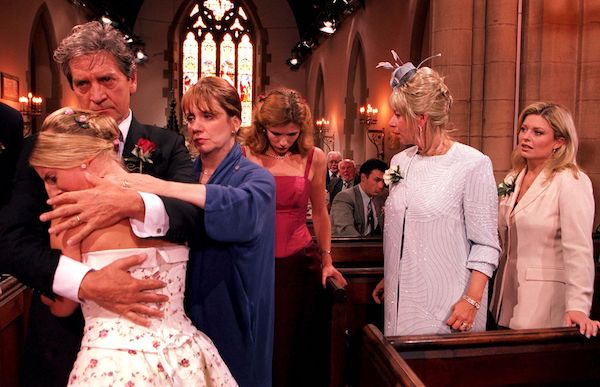 Nicola's mum Maureen hasn’t been seen since Nicola's aborted wedding to cheating chef Carlos Diaz in 2001. Her dad, Rodney (Patrick Mower), on the other hand, is rarely out of her sight.

Nicola does have the world's most embarrassing dad. Rodney is the oldest swinger in the village (sorry, Eric) and proud of it.

His biggest falling out with his daughter was when Nicola scared off the love of his life, New Age sex therapist 'Twisty' Misty Allbright (Hedydd Dylan).

Nicola was afraid their plan to move to Thailand would be the death of him. As it was Rodney suffered a stroke after Misty departed.

How many siblings does Nicola King have? 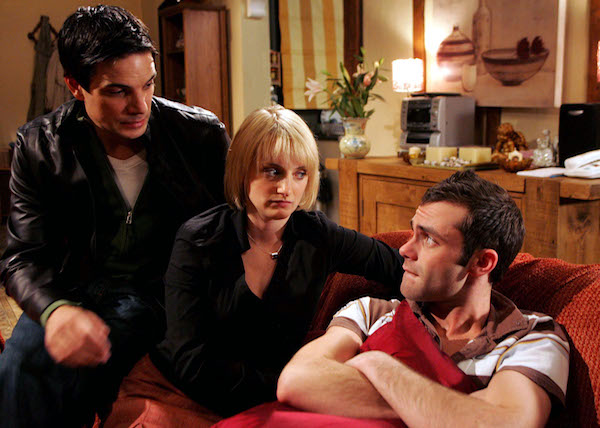 Nicola has an older half-sister, Bernice, the only child of Rodney and Diane (Elizabeth Estensen). She is aunty to Bernice’s kids Gabby and Dee Dee.

She also has a gay half-brother, Paul Lambert, son of Rodney and Val (RIP, still ADORED)

Paul believed his dad was vile homophobe Jimmy Pepper but Val and Rodney had an affair while he was married to Diane.

Nicola and Paul fell out when she had a crush on his boyfriend Ivan but Paul returned for hers and Jimmy's wedding and Val's spectacular funeral send-off.

What have been Nicola King and Bernice's biggest fallings out? 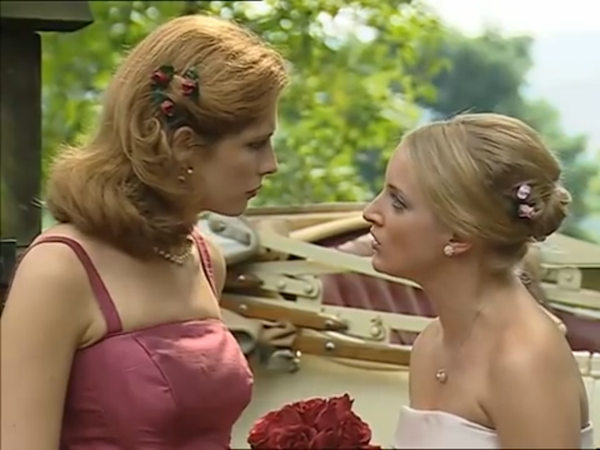 Bernice (Samantha Giles) and Nicola have had their moments (Credit: ITV/YouTube)

When Nicola found out on her wedding day that Bernice had an affair with her husband-to-be Carlos. "You cow!"

She shamed her sis in front of the congregation and Bernice's unsuspecting husband, Ashley who was about to marry them.

Most recently Bernice was appalled when Nicola, acting under orders from Graham Foster, evicted her from her home.

Luckily this was rectified when Kim Tate realised it wasn't financially viable with the Capital Gains tax. The slap Bernice gave Nicola though was heartfelt.

How many times has Nicola King been married? 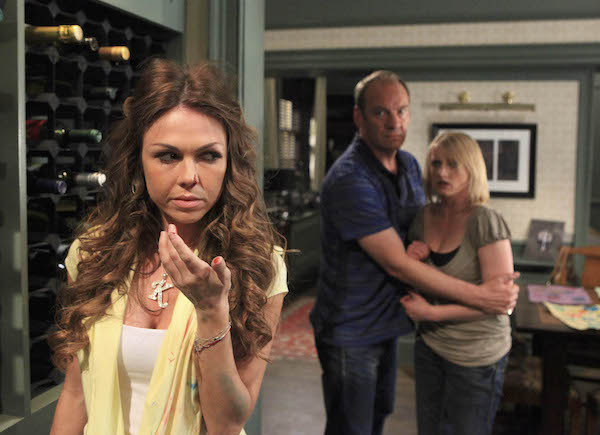 She was engaged to fishmonger Simon Meredith in 2004 but that went pear-shaped when her troublesome mother-in-law-to-be thought she saw Nicola cheating on Simon with brother Paul's boyf Ivan.

Marriage no.1 was to millionaire widower Donald De Souza (Michael Jayston). Nicola was only after his money and was disappointed when he emerged from a coma.

Nicola tried to bump him off while she had an affair with David Metcalfe but Donald rumbled her. In the end she got £20,000 out of him.

Jimmy and Nicola first got together in 2009 when she was still with David after a boozy night in the back of an Emmerdale Haulage van.

One of their toughest times was when Jimmy was involved in a car crash and lost his memory. Devious Kelly Windsor told him she had been having an affair with Jimmy and almost split him and Nicola up.

Nicola was also not best pleased when she returned from her spa job in Dubai to discover Jimmy had got into massive debt and sold Mill Cottage.

What is it with Nicola and Jimmy King and fancy dress make-up sex? 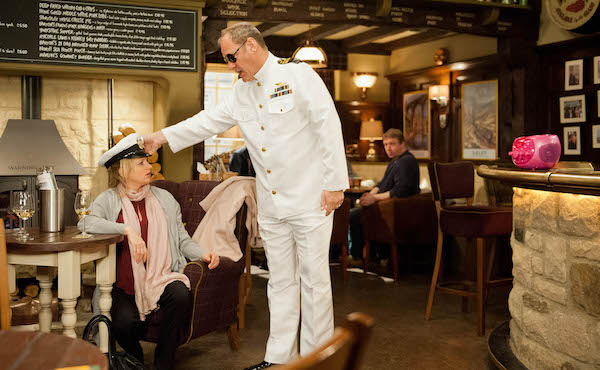 Nicola and Jimmy's marriage is one of the village's longer lasting one at nine years and at times one of its most baffling.

Why does he put up with someone who is so mean to him? Why does she suffer such a complete lummox?

Let us not forget this is a husband who once bought her a long-armed stapler for Christmas and gets turned on by the sight of Nicola scrubbing a U-bend in a pinny.

Yet however bad it gets, they do know how to make-up, usually with the help of an extensive wardrobe department. Who can forget their recreation of An Officer and a Gentleman in The Woolpack?

Misty once revealed that Jimmy's spirit animal is a bear, Nicola's is a crow. That's about the only thing we have yet to witness in their role playing. Don't bet against it.

Read more: It's the full Emmerdale cast line-up for 2019

What jobs has Nicola King had in Emmerdale? 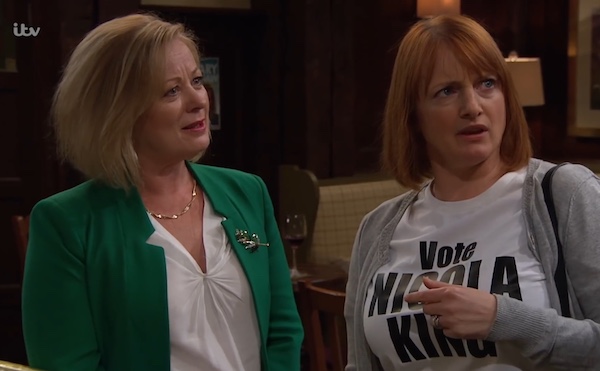 In her early days she ran a cleaning business which employed Pearl, Betty and Laurel.

She was a chauffeur for Paddy Kirk after accidentally injuring him. She also stalked celebrity chef Anthony Worrall Thompson, and run a dog-sitting business.

Her biggest jobs have mostly been up at Home Farm. She was estate manager and PA to Natasha Wylde (Amanda Donohoe).

She also got her feet under the table with Joe Tate and Graham Foster until she tried to scam a drunken Graham with Robert Sugden.

As compensation for the Mill Cottage fire she got a managerial job at Sharma & Sharma and also had a short-lived administrative job in Dubai.

Most recently she stood as a candidate for the Hotten and District Collaboration Party. She slagged off all the whingeing locals but got elected when the main opposition was disgraced.

How did Nicola King nearly die in a fire? 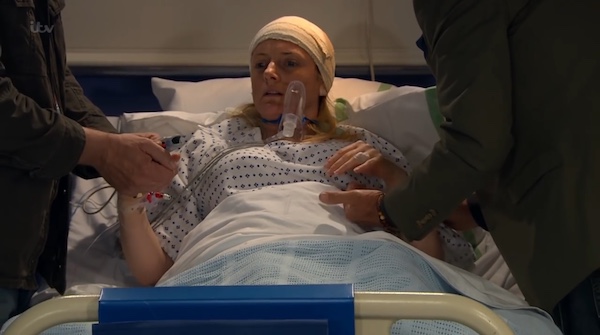 That was thanks to Priya Kotecha's louse of an ex-husband Rakesh who set fire to Mill Cottage for the insurance.

She was saved by good old Ronnie Hale and Dan Spencer. Nicola had to have surgery after suffering a subdural hematoma and was diagnosed with brain damage.

For months Nicola couldn't move her right arm or leg and was told she might never walk again.

She has since made a full recovery, although she played on her disability to get votes in the local election.

How many children does Nicola King have? 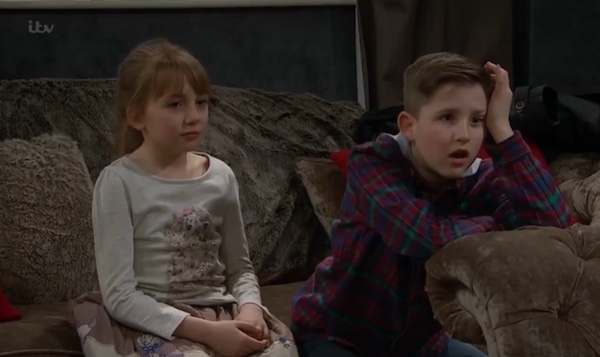 Nicola has one biological daughter, Angelica, by Jimmy and two step-kids, Elliot, Jimmy's by Kelly Windsor, and Carl, Jimmy's after a fertility clinic mix-up with Juliette Holliday.

Little Angelica had a fairly hairy start to life. Prematurely born after Nicola was pushed down a staircase by Lexi King (Sally Oliver) she was kidnapped by Lexi and dangled from a rooftop.

Nicola's hardest parenting decision was when she decided at the last minute to leave Angel behind with Jimmy when she was offered a fancy spa administrator job in Dubai. A job she later got sacked from after a drunken incident.

Nicola suffered a miscarriage at Christmas 2014, one of her most heartbreaking storylines. 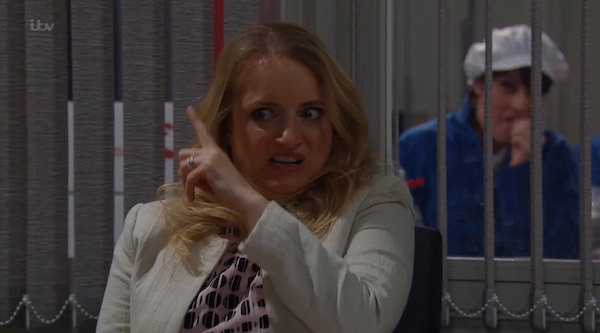 Nicola is not a beaver fan (Credit: ITV/YouTube)

"What's that?! That little ratty thing. Why is it here? Shifty eyed and freaky teeth." - Nicola reveals her irrational fear of beavers when Jay has a toy one in the office at Sharma & Sharma.

What is your favourite Nicola moment? Leave us a comment on our Facebook page @EntertainmentDailyFix and let us know what you think