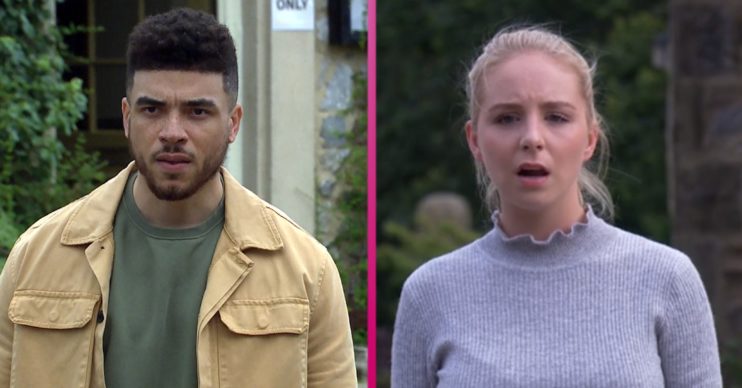 Emmerdale SPOILERS: Nate takes the blame for the hit and run?

Jamie is trying to pin the crime on Belle

Emmerdale spoilers reveal Nate offers to take the blame for Moira’s hit and run to save Belle. But will he go through with it?

A few months ago, Jamie ran over Moira. However he recently started to pin the crime on his ex-girlfriend Belle, as revenge for reporting him to the police.

In next week’s scenes, Belle returns home after her night in the police station.

The Dingles begin to speculate who they think this new witness could be who’s given evidence against Belle.

However Sam notices Belle is behind on her medication and encourages her to take her pills. But the voice of Lisa tells Belle not to, so she’s obedient and doesn’t.

Cain and Moira see Jamie in the street and confront him. Moira compels Cain to back down and leads him away.

She speculates that Jamie will likely have left some piece of loose evidence lying around which they’ll be able to use against him. Soon Cain and Moira are breaking into Home Farm to find it.

Emmerdale: Nate takes the blame for the hit and run?

Meanwhile Nate is stunned to realise the extent of Belle’s history with schizophrenia and realises the gravity of the situation.

When the Dingles realise Jamie has cottoned on to their plan, their situation seems hopeless.

However Nate offers to take the blame for the hit and run in an effort to keep Belle out of harm’s way.

Tracy is livid to discover Nate’s thinking of going to prison for Belle. Her reaction leaves him torn over what to do.

Later, Nate and Cain arrive at the police station and the farmhand struggles to muster the courage to go in and confess to the hit and run.

Will he take the blame?

Meanwhile, Belle’s mental health takes a turn for the worse…