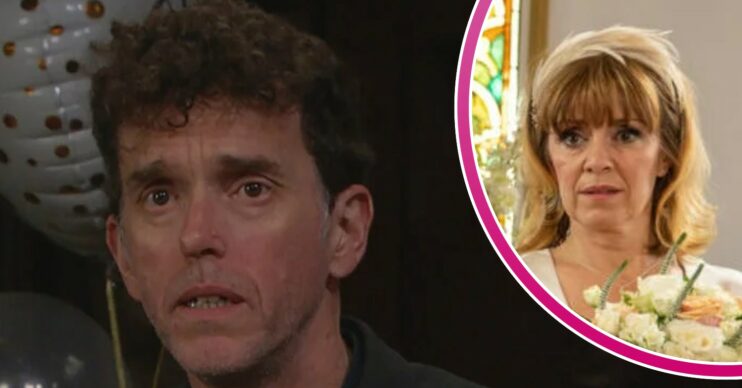 Emmerdale spoilers: Marlon wedding off as he’s rushed to hospital?

Will Marlon and Rhona's wedding go ahead?

Emmerdale spoilers this week reveal that Marlon’s health deteriorates the night before his wedding day, ending his stag do with a trip to the hospital.

With Marlon setting the ambitious goal of being able to walk down the aisle by himself he suffers a big hurdle as he tries to stand up at his stag do.

How does Marlon end up in hospital in Emmerdale spoilers?

Read More: Emmerdale: 7 dark theories on Marlon’s physio: Is there more to ‘Fit Kit’ than meets the eye?

Marlon falls at his stag do in Emmerdale spoilers

Marlon attends a last minute stag do at home that his closest friends and family have put together.

After building up the strength the past few weeks to stand, something he has been working on since his stroke, Marlon attempts to get to his feet.

Trying to stand up, his feet give way and cause him to fall.

Paddy errs on the side of caution and advises his best friend to get checked out at the hospital.

Marlon agrees that this is the best thing to do but has one condition – that he is driven to the hospital by one of the stag do attendees rather than in an ambulance.

The fall must also be kept a secret from Rhona as to not spoil her wedding day tomorrow.

After checking in at the hospital, Marlon’s chances of a perfect wedding day are not looking too good.

The doctor tells him that he must stay overnight, much to his upset.

Undertaking some tests, the results showed that he has extremely high blood pressure and must be monitored.

The morning of his wedding day soon arrives but the doctor is yet to discharge him as his blood pressure remains too high to go home.

Marlon fails to let his fiancée know about his situation leading Vanessa and Rhona’s mom, Mary, to delay the bride from heading to the church.

While Vanessa attempts to do everything in her power to delay Rhona, the bride starts to worry that something is wrong.

Vanessa reassures her friend that everything will work out whilst secretly knowing that the groom may not turn up.

Paddy and Marlon team up to try to make it to the church in time.

Will they be too late?