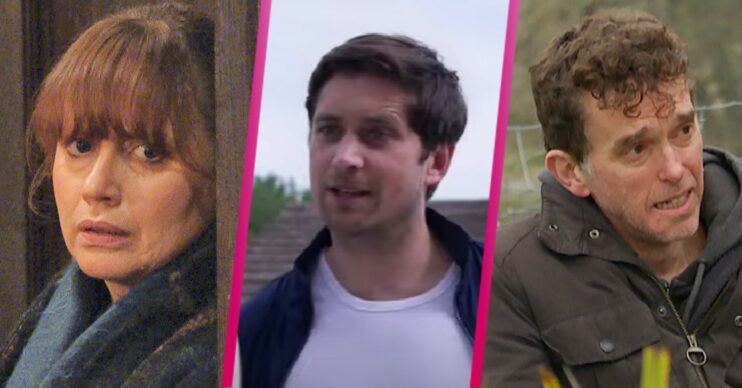 Emmerdale: 7 Dark theories on Marlon’s physio: Is there more to ‘Fit Kit’ than meets the eye?

He’s been determined to help Marlon after he suffered a stroke a few months ago and it seems like there’s a spark between him and Marlon’s ex-wife, Laurel.

However fans have other theories about Kit.

1. He will start abusing Marlon

Is Kit too good to be true? One fan certainly seems to think so and has suggested Kit will begin abusing Marlon.

Kit has been pushing Marlon with his physiotherapy and Marlon was even able to take his first step.

However some think Kit can’t be trusted and will get nasty with Marlon.

2. He’s going to have an affair with Rhona

Another fan theory is that Kit will have an affair with Marlon’s fiancée Rhona.

Marlon and Rhona recently got engaged and are planning their wedding.

But with Kit being around the house a lot, some are predicting Kit will fall for Rhona and have an affair.

I just hope this Kit doesn't fall for Rhona…. this is Emmerdale. #emmerdale

3. He’s going to get together with Laurel

Laurel has admitted she’s ready for a new man in her life following her failed romance with Jai.

In last night’s episode (Wednesday, June 29) Laurel ended up meeting Kit when she was with Marlon.

It became clear there was a spark between them, as she accidentally called him “fit” instead of “Kit”, but could they end up getting together?

Fans seem to think so.

Kit could be Laurel’s new man. He seems a nice guy #Emmerdale

Some fans are predicting that Kit could have feelings for Marlon.

The two have been working closely together for a couple of months, but some are wondering if Kit could be interested in Marlon in a romantic way.

“I suspect it’s poor Marlon who Kit’s got his eye on,” wrote someone on Twitter.

A few years ago it was revealed Lydia fell pregnant when she was a teenager and her real name wasn’t Lydia.

When she was 15 Lydia, who was known as Jenny Finn, fell pregnant with her classmate and kept her pregnancy hidden.

She gave birth to a son but he was stillborn.

Heartbroken, she buried him in a woodland area, moved away and took on the identity Lydia Hart.

A few years ago, the body of a baby was found and Lydia confessed he was hers.

Now one fan is wondering if Lydia’s son wasn’t dead after all and Kit could somehow be Lydia’s son.

Another theory is that Kit could be the next village serial killer.

A couple of months ago, Emmerdale serial killer Meena was given a life sentence in prison for all of her crimes.

In Tuesday’s episode, while looking at Kit’s eyes, Lydia mentioned how Ted Bundy had good eyes but obviously turned out to be a serial killer.

She then said to Kit: “Oh don’t worry, I’m sure you’re no serial killer. Just same eyes that’s all,” before turning around to get his drink.

Kit looked worried, leading some fans to think he may actually be a serial killer.

One fan also pointed out that Kit looks a lot like Emmerdale resident Mackenzie Boyd. They are also both Scottish!

Mackenzie is the younger brother of Moira Dingle.

But due to their resemblance, some fans think he could secretly be related to Mack and Moira.

Is Kit a relation of Mackenzie's? He looks like him if you aren't paying attention! #emmerdale