Emmerdale spoilers reveal Marlon and Rhona spend New Year’s Eve together. But will it lead to a reunion?

In next week’s scenes Marlon is despondent about his own romantic life. He ends up admitting to Paddy that he’s feeling lonely.

Later, Rhona invites Marlon to spend New Year’s Eve with her and she lights up when he agrees to come to her place for the evening.

Read more: Emmerdale’s Max Parker and Kris Mochrie ‘confirm’ they have moved in together with sweet video

As the New Year looms, Marlon and Rhona chat the night away and there’s a flicker of attraction in Rhona’s eyes as Marlon tells her how much he’s enjoyed spending the evening with her.

Could this be the start of a reunion for the pair?

In 2010, Rhona and Marlon started going out. However Rhona began to develop feelings for his best friend Paddy Kirk.

She began dating Paddy but soon discovered she was pregnant with Marlon’s child.

In 2011, the vet gave birth to a son, who she named Leo. Whilst Marlon was initially upset about Paddy and Rhona’s relationship, he eventually accepted it.

Over the years Marlon and Rhona remained friends whilst raising Leo.

Earlier this year, Marlon was furious when he discovered that Rhona planned to take Leo and move to France with he boyfriend Graham.

However on the night they were meant to leave, Graham was killed by Rhona’s rapist ex-husband Pierce Harris. 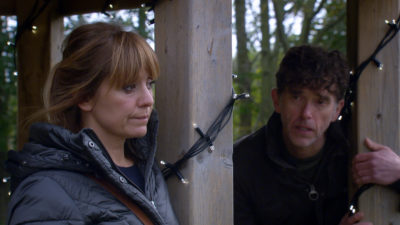 Marlon was initially arrested for Graham’s murder. But eventually the truth came out about Pierce killing Graham and the chef was released from prison.

Over the last few months, Marlon and Rhona appear to have grown closer. Recently the two had a heart to heart over their son Leo after discovering Laurel was considering aborting child, who was revealed to have Down’s Syndrome.

But could this all be leading to a big reunion?