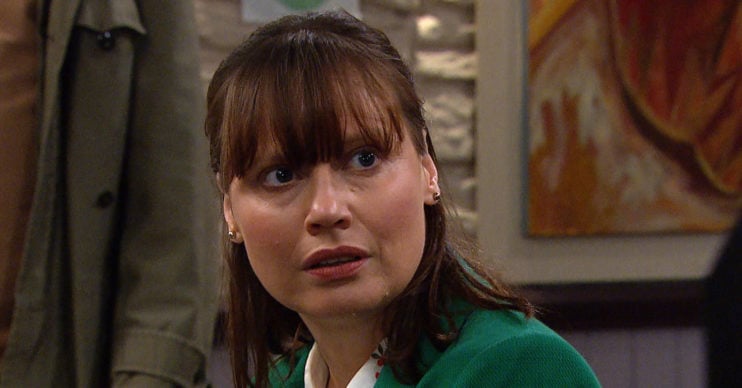 Emmerdale’s Lydia Dingle is in for a terrible ordeal this coming week as she’s framed for a pensions scam.

The kind-hearted cleaner is in the middle of an interview to be a school counsellor when the police arrive to arrest her.

They have traced an online pensions scam to her computer – and to her online identity.

Unfortunately as she’s in the middle of her Zoom interview in the cafe, the police collar her.

The only problem is that Lydia is totally innocent.

Read more: Emmerdale: Mackenzie ‘has no purpose’ and needs to leave, say fans

News soon spreads around the village and actress Karen Blick has revealed how Lydia is devastated by it.

“She’s not coping very well with people gossiping about her,” she said.

“The village [is] thinking the worst. For Lydia, her reputation is important. Although at times she’s not bothered what people think, she deeply is.

“She’s a good person, and she doesn’t want to be seen to have done something that she hasn’t.”

Lydia is one of the soap’s rare nice and trustworthy people, so to lose that would be an ordeal for her.

Karen added: “What I love about Lydia – and I think what people see – is that there is an innocence to her.

“She’s kind of from a bygone age almost! I think people instantly trust her.”

The actress continued: “She’s not a gossip – she does enjoy sitting down with Mandy or any of the Dingles and having a chat about what’s going on in the village, but if somebody confides in her, then she takes that very seriously.

“She wouldn’t divulge people’s personal business, and she does care about people.”

Later in the week it becomes clear just who is really responsible for the scam.

And it leaves Sam furious. He explodes at the culprit – but who has done this to Lydia?

How far will they let it go before confessing and getting her off the hook?