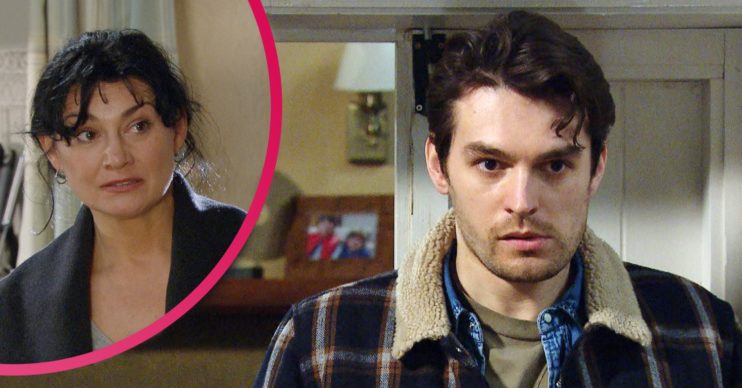 Emmerdale: Mackenzie ‘has no purpose’ and needs to leave, say fans

Emmerdale fans have called for Mackenzie Boyd to leave the village, saying he has no purpose.

Mack arrived in the village last year and it was revealed he is the younger brother of Moira Dingle.

He arrived to tell Moira that their mum had died and Moira felt awful, as she hadn’t seen her mother in years.

Read more: Emmerdale SPOILERS: Liv turns to drink as she struggles to deal with Paul’s death?

Recently it was revealed that when Mack arrived and told Moira that their mum had died, she was still alive.

However their mum did die a few weeks later. But Moira was devastated to learn she could’ve had the chance to say goodbye if Mack told the truth.

Since the revelation, Moira has forgiven her brother. But he has been working with Nicola and the Dingles on some dodgy deals.

However fans have said there’s no purpose to Mack and have called for him to leave the village.

The more charming #Emmerdale's Mack tries to be, the more ready I am for his demise pic.twitter.com/rDGsh5lu3W

But some fans are loving Mack.

Mack is so funny. #Emmerdale

Mack is so conniving and manipulative. I love him. #Emmerdale

I love Mack so much 😂 #emmerdale

Emmerdale: What’s next for Mackenzie?

In next week’s scenes Moira and Cian set up a plan to catch Mack out on his dodgy dealings.

I like Mack but am still wondering what the actual point/purpose his being in the village is.

Mack’s oblivious and assures Charity he’s been discreet about their job.

But he realises he’s been caught out when Charity tells him she is aware he invited Aaron along yesterday as he came to her and threatened to blow the whistle unless he was cut in.

Charity warns Mack not to mess the job up. However when he’s doing the deal, Mack’s buyer is furious to see a tracker in amongst the goods in the back of the van.

The buyer flees the scene leaving Mack and Aaron shocked.

Read more: Who played Graham Foster in Emmerdale and who killed him?

Moira and Cain creep up to where the signal on he tracker has led them, but are they in time to catch Mack and Aaron in the act?

How will Charity react when she finds out Mack has messed up a deal once again?