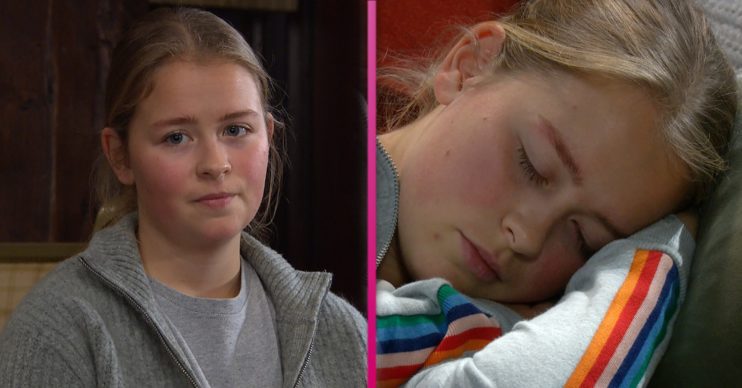 Liv has been having seizures for over a year

Over the last year, Liv has been having seizures, but doctors were unable to give her a diagnosis. However next week, she is told she has epilepsy.

The news leaves Aaron beside himself but Liv mostly seems ready to own her condition.

The next day, Aaron isn’t happy when Liv reveals she’s organised a kayaking trip for him and Ben. But Aaron still goes ahead with the trip and heads off.

Emmerdale: Liv has another seizure

Meanwhile at Mill Cottage, Liv begins to have a seizure and Vinny panics. Unsure what to do, he calls his dad, Paul.

When Paul arrives, he quickly calls an ambulance before trying to calm Vinny down. But soon Liv comes back around.

Back at the HOP, Aaron panics to discover a stack of missed calls from Vinny.

Aaron rushes to the hospital. When we he arrives Vinny discourages him, in his state of fury, from seeing Liv.

But Aaron is furious and demands Vinny moves out of Mill Cottage.

Read more: Emmerdale SPOILERS: Trouble for Sarah as Danny is released from prison?

Vinny is surprised when Paul protectively stands up to him. But will Aaron change his mind?

And will Liv be okay?

Liv started having seizures last year. Her first one happened in the café.

She later had another in the woods and was found by Wendy Posner.

Recently the teenager had another seizure and Paul helped her. Although he agreed to keep it quiet, he became concerned when she began driving lessons and told Aaron what happened.

As a result, Liv told Vinny that his dad has been gambling again.

Are you looking forward to Emmerdale’s Christmas episodes next week? Leave us a comment on our Facebook page @EntertainmentDailyFix and let us know what you think of this story