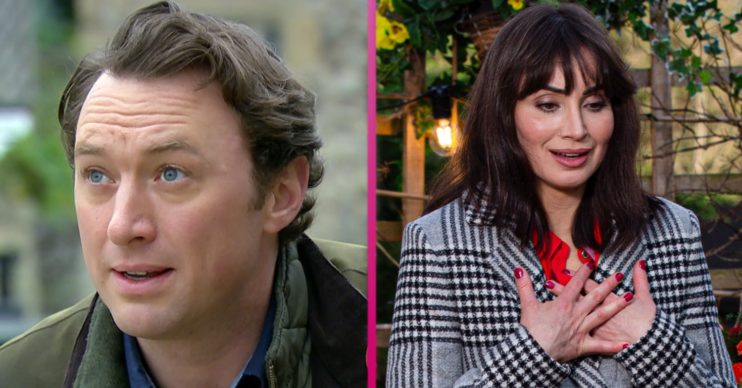 In next week’s scenes Liam gives David a secret mission to help him set up his proposal to Leyla.

But Meena is jealous suspecting there’s a spark between David and Leyla, unaware there is a plan afoot.

When Meena sees David heading over to see Leyla in the street, she is upset.

David delays Leyla until Leanna gives him the signal that Liam is ready to propose.

As Leyla and David platonically part ways, Meena rages seeing them so close.

When Pollard points out to David that Liam’s proposal doesn’t appear to be going to plan, David explains to Meena that the reason he spent the morning with Leyla was to give Liam time to prepare for the proposal.

But this inadvertedly blows the surprise.

Liam is upset that his proposal has been ruined. But Leyla cans see the lengths he went to in order to propose to her and suggests he tries again.

Read more: Who plays Kev in Emmerdale and what has he been in before?

After he delivers a speech from the heart, she’s overjoyed and says ‘Yes!’

As Liam and Leyla celebrate their engagement, David and Meena’s relationship is looking less stable.

No happily ever after?

Recently Roxy Shahidi and Jonny McPherson, who play Leyla and Liam revealed that they would rather the couple didn’t live happily ever after.

In a recent interview, the two stars were asked if they would like to see their characters live happily ever after.

Roxy told Entertainment Daily and other media: “Absolutely not, too boring.”

Roxy continued: “There’d be no story, they’d just mince off and get cupcakes and coffee.

“No we’ve got to have something. I mean it would be nice for them to have a period of joy for goodness sake you know and let them enjoy the work that they’ve put in. But ultimately no.”

Johnny added: “It might be interesting for there to be some more jealousy as well rather than it just be like three months and then divorce.”