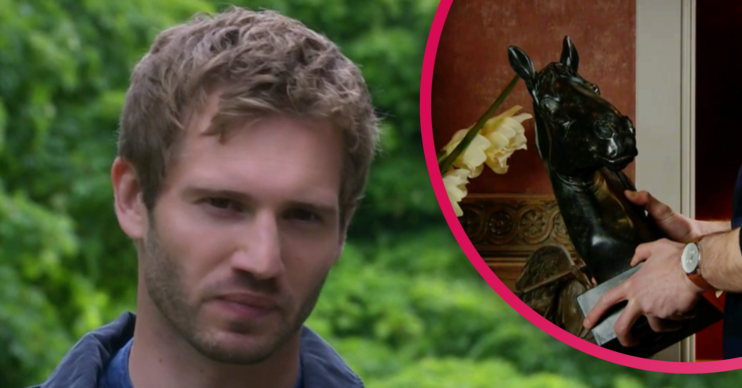 Emmerdale spoilers reveal Jamie Tate will explode with rage next week as he discovers his mum Kim’s hidden camera.

Vet Jamie is one of the people Kim suspects could be poisoning her.

And as such she has hidden a camera in Home Farm to catch the culprit in the act.

So far none of the suspects know what Kim is doing as she continues to behave confused and disoriented.

But next week the jig will be up when Jamie discovers the camera.

Emmerdale spoilers: What happens next week?

A spoiler clip posted to the soap’s website has shown the moment he makes the discovery.

He is listening into Kim flirting with Will – but while snooping he accidentally knocks a frame over.

Picking it up, he goes to put it back but spots the new horse statue.

And it’s not long until he discovers the camera hidden in its eye.

Jamie Tate romps with Dawn in front of Kim’s camera

Jamie’s set to explode when he discovers the truth – not least because it means he knows his mum filmed him having sex with Dawn.

The couple had been sick of being in the middle of their family drama.

“We’re wasting our lives thinking about other people when all that matters is you and me,” Dawn told him.

“Which is why I was wondering if you are free this afternoon.”

When Jamie asked for how long, Dawn slowly walked into Home Farm’s main living area and told him: “For as much time as you can give me.”

The camera then panned away to spare the audience’s blushes – but Kim’s didn’t.

Her horse head camera caught it all in glorious HD. And it left fans sickened.

How did Emmerdale fans react?

A second said: “How the hell can Dawn and Jamie not spot Kim’s Camera behind the ornament!”

A third said: “Kim about to get an up close and personal look at her son and Dawnie!”