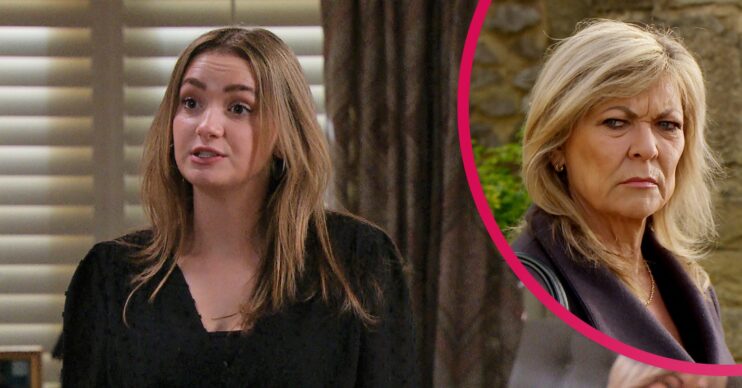 Emmerdale SPOILERS: Gabby to give baby Thomas up?

Emmerdale spoilers for next week reveal Gabby grows fed up of not being able to go out as she’s stuck looking after her son.

Recently Gabby gave birth to her son, who she called Thomas. Although it seems Gabby is enjoying being a mother, she soon starts to feel like she’s missing out when she sees her friends out at a party.

Next Gabby is frustrated to see her friends are out partying while she’s stuck at home with her baby.

Fed up of not being able to go out, she soon palms Thomas off on both Bernice and Kim.

Later Bernice is proud when it seems like Gabby is ready to take a lead in caring for Thomas, but is she?

Could she end up giving Thomas up?

Jamie is the father of baby Thomas, however he never got to meet his son.

A few weeks ago, Jamie crashed his car into a lake on his way out of the village.

His car was brought out of the river, however Jamie’s body was never found.

Despite everyone believing Jamie has died, Kim is adamant that her son is still alive.

Read more: Why is Emmerdale on for an hour tonight? Soap schedule will change this week

Recently Jamie’s ex-wife Andrea was murdered by Meena Jutla. Although the police suspect murder, they have not figured out who it was.

This week, Kim holds a memorial for Andrea in the hopes Jamie will return.

Although a car turns up late to the memorial, it turns out to be Andrea’s mother. She soon has some news for Kim.