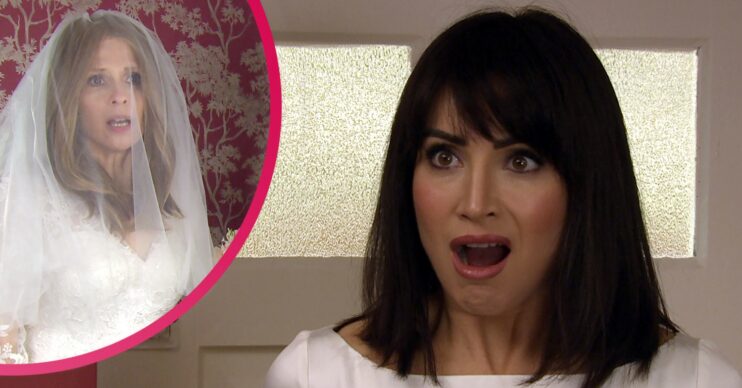 Liam and Bernice were previously engaged

Emmerdale spoilers for next week reveal Bernice makes a final attempt to win Liam back on his wedding day. Will she end up ruining the wedding?

Recently Bernice returned to the Dales after living in Australia for over a year. She went to Australia to help her daughter Dee Dee look after her dad Charlie, who had been involved in a car crash.

After returning, she decided she wanted to win back her ex-fiancé Liam, but he is now engaged to Leyla.

In next week’s scenes Leyla is desperate to marry her fiancé Liam. However Bernice is determined to stop the wedding from going ahead.

Soon Leyla starts to worry that her big day is jinxed.

Will her attempts to win him back work? Will Liam and Leyla get married?

Bernice will put up a fight for Liam

In a recent interview Samantha Giles, who plays Bernice, was asked if her alter ego would put up a fight for Liam.

When asked if Bernice would let Leyla take her man she told Entertainment Daily and other media: “I think probably we can all guess that she’s not going to take this lying down. She’s going to fight.

Read more: Emmerdale SPOILERS: Luke and Victoria to split after he confesses the truth?

Even if she doesn’t really want Liam in the end, she’s going to fight for him.

“Even if she doesn’t really want Liam in the end, she’s going to fight for him.”

Are you glad the Bernice is back in the village?

Will you be watching next week’s Emmerdale? Leave us a comment on our Facebook page @EntertainmentDailyFix and let us know.