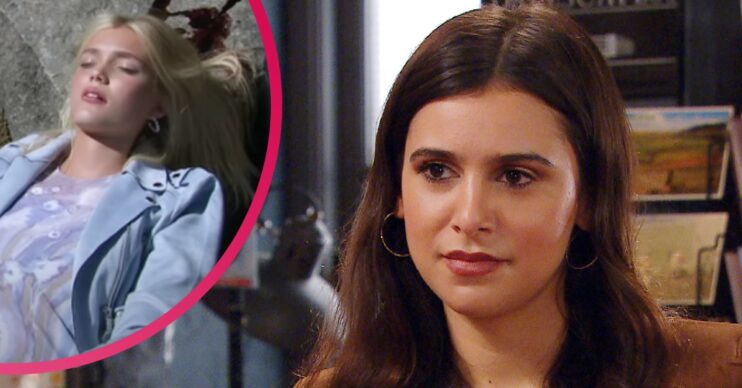 Emmerdale fans are convinced that Meena taking Leanna’s ring after killing her will be her downfall.

Leanna tried to escape Meena, but ended up twisting her ankle as she ran through the graveyard.

Meena caught up to the teenager on the humpback bridge. Despite Leanna telling Meena she would keep quiet about Nadine’s murder, Meena refused to let her go.

She pushed Leanna off the bridge and she fell to her death.

Soon Meena went down to Leanna’s body in the water and took her ring off her.

The ring was a present from Jacob. He originally proposed to Leanna with it, but after she rejected him he gave it to her as an 18th birthday present.

Meena put the ring on a chain and has been wearing it around her neck.

However fans think that this will be Meena’s downfall and that someone will spot her wearing Leanna’s ring.

Meena needs to hide that ring somewhere else #emmerdale

I hope someone clocks on that Leanna isn’t wearing the ring and Meena has it! #Emmerdale

Why would Meena steal the ring Jacob gave Leanna. Would that not be incriminating? #emmerdale pic.twitter.com/sC9t8VNhxi

In this week’s scenes Meena is relieved when Leyla tells her the police don’t think Leanna’s death was suspicious.

She can’t help but smile as she plays with the ring she pried from Leanna’s lifeless body.

Later in the week Liam asks Jacob to help with Leanna’s things to try and make amends after blaming him and Liv for what happened to Leanna.

Liam soon becomes distressed when Jacob asks after the ring he gave Leanna.

Jacob is distraught at the loss of the ring and David is gutted for him. Whereas Meena desperately tries to keep a poker face.

Will you be watching Emmerdale this week? Leave us a comment on our Facebook page @EntertainmentDailyFix and let us know what you think!