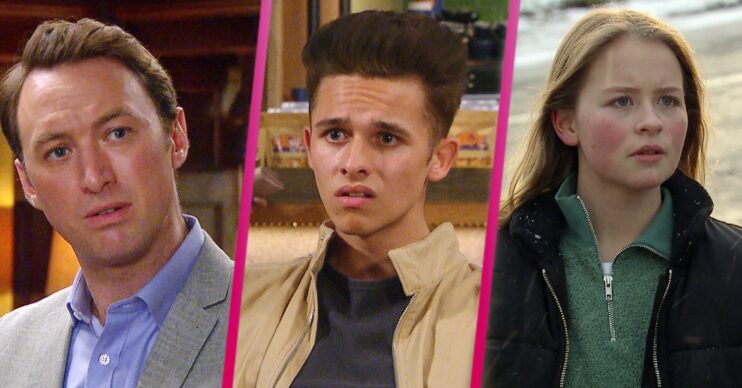 Emmerdale spoilers for next week reveal a heartbroken Liam blames Jacob and Liv for what happened to Leanna.

Despite Leanna telling Meena she would keep it secret, Meena pushed the teenager off the Humpback Bridge.

The next day, Bernice Blackstock was horrified to discover Leanna’s body.

In next week’s scenes Liam is distraught over Leanna’s death.

Leyla tells Meena that the police don’t think Leanna’s death is suspicious and Meena is relieved.

She plays with the ring that she pried from Leanna’s body.

At the Humpback Bridge Jacob, Gabby and Liv struggle with their guilt over Leanna’s death.

Later at the bridge Liam becomes angry when he witnesses the start of the memorial.

Leyla tries to calm him down, but he blames Liv and Jacob for what’s happened and they feel terrible.

Meanwhile Meena is relishing in the drama.

Overcome with grief, Liam rips apart the flowers left at the scene. Later Leyla is shocked to discover Liam went to the chapel of rest to see Leanna by himself.

He tells her to spend the night at David’s, but she refuses to leave him. Liam storms upstairs leaving Leyla distraught.

Cain is left thoughtful after seeing Liam reject Charles’ attempts to console him.

Wanting to help, Cain goes to the cricket pavilion and reaches out to Liam in his own way.

Liam is grateful beyond words for Cain’s support and the two sit there, drinking in silence.

Liam struggles with his grief

Later Liam asks Jacob to help with Leanna’s things to try and make amends, but Liam becomes distressed when Jacob starts asking about the ring he gave Leanna.

Jacob is upset at the loss of the ring and David is gutted for him, whereas Meena tries to keep a poker face.

A broken Liam fights his inner turmoil as he surveys the river bank where Leanna was found before driving away from the village.

Leyla’s distressed that Liam will come to harm.

What did you think of this week’s episodes? Leave us a comment on our Facebook page @EntertainmentDailyFix and let us know what you think!