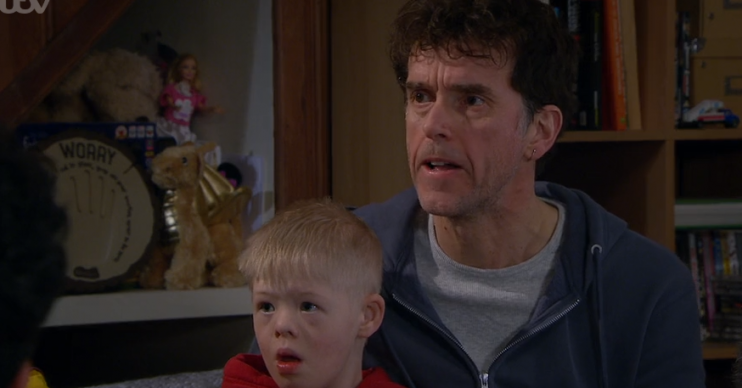 Emmerdale’s Marlon Dingle is going to make a heartbreaking mistake and leave his son Leo devastated next week.

The chef is struggling in lockdown without being able to see either of his children.

He has shown symptoms that mean they need to isolate away from him.

Marlon is stuck with step-son Ellis and his dad Al Chapman, and it begins to trouble him.

Actor Mark Charnock told Digital Spy: “He has got regrets and concerns, Marlon is always cautious and he’s a worrier.

“He had a little cough, a mild version of one of the symptoms so he thought safety first so he isolated and then of course, the cough went away.

“But by now April has been with Bob for a few days and Marlon doesn’t feel he can get her back, it wouldn’t be the right thing to do.

“It was the sensible thing to do to let April stay with Bob, even though Marlon didn’t have the virus, but it’s a catch twenty-two because now he can’t have April with him.”

What happens to Leo?

Being without his children affects Marlon in an awful way and when he tries to say hello at a distance to Leo, it is the worst thing he could have done.

But Mark explains that one Thursday night, after clapping for carers, Marlon “gets carried away and goes all the way into the village and he waves at Leo and Leo doesn’t understand why Marlon won’t come into the house”.

Leo then “kicks off and scratches and bites his mum” and she’s “furious with Marlon”.

Mark added that Marlon is “devastated he’s made such a huge mistake”.

Sadly Marlon doesn’t have anyone to turn to during his troubles – but he does have Al there to snipe.

The episode will air on Wednesday June 24 at 7pm on ITV.

What do you think of Marlon’s mistake? Leave us a comment on our Facebook page @EntertainmentDailyFix and let us know what you think!