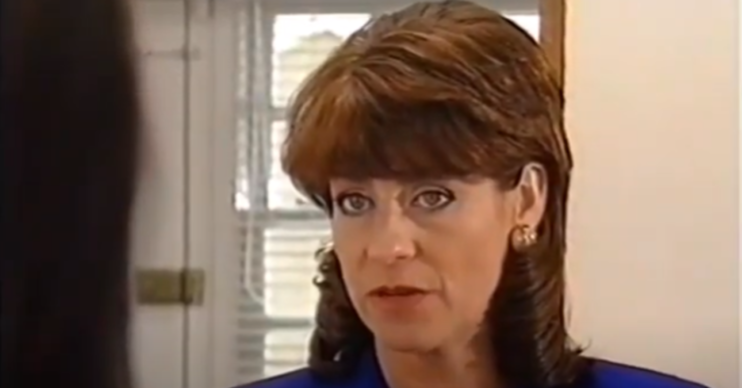 Emmerdale fans have called Viv Hope’s death the ‘worst mistake the soap ever made.’

Back in 2011, Viv was killed off after corrupt police officer PC Nick Henshall set fire to the post office.

Her husband Bob managed to save their children Cathy and Heath. Meanwhile Terry Woods made an attempt to get Viv out, but they both ended up dying.

Although she is no longer alive in present day scenes, Viv is still alive in Classic Emmerdale episodes, which are being aired on ITV3.

Consequently, fans are discussing what a big mistake it was killing off Viv.

In a Digital Spy forum, one fan wrote: “Terrible decision!”

A second said: “And that is why characters should only be killed off when really necessary as there is no coming back.

“Far too many characters have been killed off in soaps when surely a different exit plan could have been sorted to enable returns.

A third added: “Viv was brilliant! Biggest mistake Emmerdale ever made.”

Another commented: “It was a stupid choice, it hardly carried any weight either. Viv could have moved down south for a fresh start and possibly returned later. It was done as a shock death, but it wasn’t even a shock and it was really badly done.

“Some people’s exits and deaths can be felt for years. Viv was gone and forgotten and that’s it, she deserved better, Viv was a big character.”

Viv’s funeral occured off-screen after her family agreed it should be held in her hometown in Essex.

Bob raised the twins and, after he got into a relationship with Brenda Walker, she became their mother figure.

Despite Bob and Brenda no longer being together, they still share custody of the children.

Do you think it was a mistake to kill off Viv? Leave us a comment on our Facebook page @EntertainmentDailyFix and let us know what you think of this story.